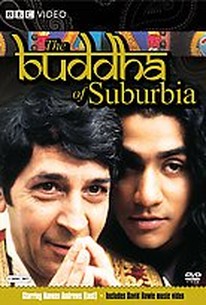 In the new tradition of "Tales of the City," this long, complex British satire profiles a decade in the life of a British family. The story opens in a South London suburb where main protagonist Karim Amir lives with his Indian father, Haroon, and his English mother during the 1970's. Haroon is a civil servant who makes extra cash, and gains notoriety for teaching "Eastern Philosophies," of which he knows nothing. Still, as Buddhism is in fashion, people pay him a bundle to hear his vapid, happy ramblings. When not preaching, Haroon is trysting with a rich follower, Eva Kay. Karim's mother learns of the affair and leaves with his younger brother. Karim stays with his father and his new love. He begins a career on the stage. The story also follows Charlie, Eva's boy as he aspires to become a rocker. Other plots and subplots abound in this film. ~ Sandra Brennan, Rovi

Critic Reviews for Buddha of Suburbia

Unfortunately, the movie's four hours seem to pass almost as slowly as the eight years of the protagonist's life covered in the film.

There are no featured reviews for Buddha of Suburbia at this time.