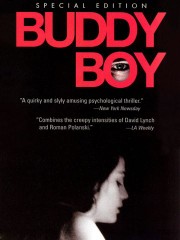 Michael T
½ May 2, 2016
The weirdness of this thriller ensures that it is never boring.

The film provides a look into the surrealistic existence of emotionally stunted, stuttering misfit Francis (Aidan Gillen,) who lives with his trollish invalid stepmother (actual amputee Susan Tyrell) in a squalid apartment.

Suffering from overwhelming guilt concerning his sexuality, his religion, and himself, he goes to confession monthly, admitting every impure thought and indiscretion.

The contrast between faith and the id is revealed in the opening, which presents the viewer with a montage of religious imagery followed by Francis, uh... pleasuring himself to a magazine pair of voluptuous breasts.

Like Kevin Spacey in "American Beauty," this is the high point of his day, which soon descends into woeful monotony. He finds a new past time in spying on his attractive neighbor Gloria (Emmanuelle Seigner, controversial Polish director Roman Polanski's wife) through a hole in his apartment.

Then they meet. Gloria is strangely attracted to Francis, which would be unfeasible if she weren't clearly lonely and desperate too. She tells him she is a vegan, a word he doesn't understand, but he catches on.

According to her, she doesn't care what he eats, but then she buys him a 'Meat Is Murder' T-shirt, which is a mixed message if I ever saw one. This further accentuates the character's conflicting beliefs and desires.

Gloria is pretty and nice, too nice, and Francis begins believing irrational things about her pastimes, focusing on her eating habits. Meanwhile he becomes increasingly psychotic (?) and has a falling out with God. Is Francis going insane. Or is meat back on the menu?

The movie is a triumph of atmosphere- the bleakness and decay of Francis and Sal's apartment is palpable, while Gloria's big-windowed, pleasingly green abode seems to spell change for the troubled young man.

The problem, it seems, is the vast contrast in acting styles between Aidan Gillen (Francis) and Susan Tyree (Sal. the step mom.) Gillen, from the GLBTQ show "Queer as Folk" (Unwatched by me,) plays his character sensitively and gently, as a fundamentally benevolent albeit strange outcast damaged by trauma and psychosis.

Susan Tyree plays his abusive step mom more like a SNL skit. Maybe her broad performance is the fault of the material. When an actress' character is scripted to beat a plumber over the head with her artificial leg (one of the stranger scenes in this story,) maybe there isn't much room for subtlety.

"Buddy Boy," nevertheless, is an intriguing first feature and a fascinating story. It walks a fine line between being campy and profound, which isn't necessarily a bad thing.

I like the humanization of Francis, a character who might be written off as a scummy voyeur, or worse, as white trash. It raises interesting questions, contains twists, and transports you, which is something films should accomplish, but rarely do.

Mike L
February 1, 2010
An odd thriller with an odd ending. Does keep you going, the surprise towards the end is surprising, but the ending seems a little rush and confusing.

Col
November 28, 2009
One of the strangest, and most compelling films I've ever seen in my life.

Brandon S
½ November 9, 2009
I'll go so far to say that this is the best sleeper of the last ten years. Buddy Boy plays out like a film that Lynch wrote the screenplay for and was directed by Hitchcock. Totally werid and sometimes unsettling great performances and the pace is perfect. Leaves you wondering.

Nicole i
½ September 14, 2009
This movie was strange indeed, but that wasn't the problem, as I'm drawn to those kinda movies... It was the fact that this movie had a lot of potential but toward the end, it fell apart. The ending could have been stronger and it leaves you with a few questions. But some people like that, when you can come up with your own conclusion. I guess I don't, heh. :P I suppose it's worth a watch if there's nothing else on.

Scott M
½ April 3, 2009
A stuttering peeping tom deals with his sadistic grandmother, religion and a loving girlfriend while trying to retain his sanity. Gillen is great.

Jocelyn D
½ March 1, 2009
"Rear Window" meets... well, the creepiest movie you've ever seen. How this film hasn't become a cult DVD hit like "Donnie Darko" and "Perfume" is beyond me. The film didn't develop as far as it could have and ended somewhat abruptly, but that only added to the sense of unease you get from watching it. This film is unnerving yet gruesomely riveting, much like the scene of a car accident. Watching Francis' descent from repressed religious insanity to sheer psychotic behaviors isn't unexpected, but is still shocking and almost painful to witness. What was also a little painful was wondering whether Susan Tyrell (playing his invalid, amputee mother) had her legs amputated due to blood clots before or after she made this film. What a heart sinking coincidence if it was after...

Paul K
½ December 26, 2008
This movie had a lot of potential and went absolutely nowhere with it. The characters were a superb mix of bizarre, creepy, and memorable on the one hand and deeply loving and insightful on the other. The tension played out with some creative moments of inner struggle and attempted healing, which could have been remarkable if they had been followed through on. Instead, the main character is allowed to simply free fall into boringly irredeemable and utterly derivative self-destruction centered around a religious neurosis. It was almost as if the screenwriters got halfway into the movie and decided it was too much work to try to bring it to fruition and opted for a cheap, easy solution to the riveting struggles of the main characters.

Brian K
½ October 23, 2008
Loved it...!! A very twisted story about Francis, a troubled young man who soon meets the girl he starts spying on, and continues to watch her through a hole in his wall.
The ending is left open...made me think all night about every detail in the film to come up with whether the lady is really a cannibal or not.

I rented this because it was compared to both David Lynch and Roman Polanski...and I kept thinking back to Blue Velvet and The Tennant.

If you enjoyed Buddy Boy, then you should definitely check out the other two.

Bryan K
October 18, 2008
There is no explanation for the connection between the lead character and his lover. The film's plot goes from weird to surreal to incomprehensible and implausible very quickly. It's way too long.

Deanne H
June 1, 2008
this is one of those strange, quiet films. i love the lead actor here, real intense. the story is pretty slow moving but you really can't look away. the audio clips of the hxc metal he listens to are pretty bizarre when paired with this soft spoken, introverted character. his breakdown of faith comes about in large part because the girl he's spying on appears not to be the vegan she claims to be...and then the ending? i think he lifted up the rug, and found some secret place where she kept the bodies of the people she killed and ate, which means his outlook on life is more depressing than ever.

Jason C
April 26, 2008
Dull, ugly, unpleasant, and distractingly derivative. Constantly reminds you that you could be watching much, much better movies. Nice to see Susan Tyrell again, though.
Page 1 of 3