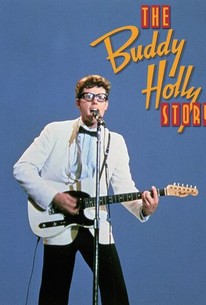 Gary Busey's sterling performance as Buddy Holly graces this entertaining film biography of this pioneering rock and roll performer. The film follows the trajectory of Holly's musical career from his beginnings in Lubbock, Texas, through his troubled recording career, to his national fame after the success of his hit "That'll Be the Day." As Holly struggles up the road to success, the film also chronicles the tension between him and his backup band, The Crickets (Don Stroud and Charles Martin Smith), along with his love for his Puerto Rican bride Maria (Maria Richwine).

The film is an entertaining chronicle of Holly's brief but productive and influential career as a pioneering rock 'n' roll composer and singer.

The plotting of this 1978 biopic is contrived, and director Steve Rash's feeling for Buddy Holly's time and place is virtually nil, but Gary Busey's performance is astonishing-less as an interpretation than as a total physical transformation.

It's Gary Busey's galvanizing solo performance that gives meaning to an otherwise shapeless and bland feature-length film about the American rock-and-roll star who was killed in a plane crash in 1959.

The facts in this pop biography are often hopelessly askew, but the story is carried by the unadulterated power of Gary Busey's original and insightful performance.

The Buddy Holly Story smacks of realism in almost every respect, from the dramaturgy involving Holly and his back-up band, The Crickets, to the verisimilitude of the musical numbers.

Fine biopic which showcases a brilliant performance by Busey as Holly, and conveys a real, raw feeling for the music.

A factual disaster and still wholly entertaining as a sort of performative docudrama that blurs the lines between Holly and Busey.

The film should please Buddy Holly fans and perhaps the young generation who are curious about rock's beginnings. Rave on.

This really is a remarkable re-creation of a singer whose skill with music placed him in the same category as The Beatles a few years later.

An extraordinary performance by Gary Busey as the early rock'n'roll star gives life to this otherwise ordinary film.

Ultimately, the success of the film rests on Gary Busey's performance. Not since we saw the young Montgomery Clift and James Dean in their earliest roles has an actor emerged with so sharp and instantly empathetic a persona.

...a better-than-average behind-the-scenes drama that boasts a sterling turn from Busey and a whole lot of memorable music.

If you want to see the promise and potential of Gary Busey before a drug-induced psychosis enveloped his entire being, this is the film to watch. Busey's portrayal of the legendary rock-n-roll pioneer is absolutely brilliant. He even sings all of Buddy's songs himself. Gary Busey is a walking, talking testament to the belief that the line between genius and madness is a thin one. Much like Buddy Holly himself, Busey is a star that burned out all too quickly.

Probably the best work Gary Busey has ever done.

Gary Busey not only did his own singing, but even lost 32 lbs to play Buddy Holly in this sensational musical biography of the singer from Lubbock Texas. Despite reportedly playing fast and loose with facts, the film is extremely entertaining. Busey was rightfully nominated for an Oscar for his effective portrayal.

I couldn't name you a single Gary Busey movie since his fabulous performance as Buddy Holly and yet...why is this guy still popping up every now and again? He may be strange but the story of the Crickets was great.