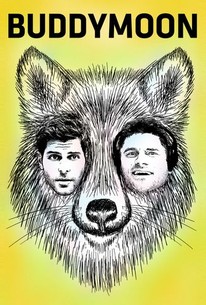 When David is left by his fiancé just days before the wedding, Flula, his relentlessly upbeat best man, insists that the pair go on David's previously planned honeymoon together: a seven-day backpacking trip through the breathtaking mountains of Oregon. On the trail, the two friends cross paths with a conspiracy theorist, a friendly backpacker, and a bloodthirsty predator (an actual wolf), while the unrelenting trek tests their friendship and their lives.

Brian T. Finney
as The Hiker

The film is fiction, but you can see the ties of a real friendship at work here, and that is part of the charm.

This first feature by TV documentary director Alex Simmons, about a weeklong, male-bonding hiking trip, hasn't packed enough plot or humor to distinguish itself amidst all that lush mountain greenery.

Everyone should have a friend like Flula (Flula Borg), a ridiculously optimistic German musician hiking with his American friend David (David Giuntoli) through the wilds of Oregon in the frequently funny "Buddymoon."

Fairly harmless and innocuous, but also only as funny as your tolerance for the overuse of Borg's idiotic shenanigans.

Perfect chemistry and Flula's Germanic malapropisms make this a fun walk in the woods.

The film's truly a two-man show and both [David] Giuntoli and [Flula] Borg play their parts perfectly.

Flula's shtick is not universally palatable and Buddymoon does sink or swim depending on your enjoyment of it.

There are no featured audience reviews yet. Click the link below to see what others say about Buddymoon!