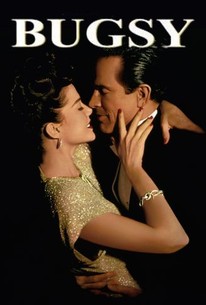 Bugsy is a character study of mobster Benjamin "Bugsy" Siegel wrapped up in a gangster movie. Siegel (Warren Beatty in a flashy performance) arrives in California in the Forties, assigned to oversee the L.A. rackets. He is quickly seduced by both the glamour of Hollywood and actress Virginia Hill (Annette Bening), whom he romances despite being unable to leave his wife and children. Siegel soon has a vision to transform a barren stretch of Nevada desert into an oasis of gambling and entertainment -- the seeds from which Las Vegas was sown. Funded by his gangster bosses, including Meyer Lansky (Ben Kingsley), the flamboyant Siegel sees his budget soar past its original $6 million, a problem compounded by the fact that Virginia has embezzled $2 million of it. In trouble with his superiors, Siegel flies back to L.A. to face the music, telling Virginia to keep the money. He would not live to see his dream of Las Vegas come true. The film is fast-paced and well-directed by Barry Levinson, with an intelligent script by James Toback and excellent support from Kingsley and Harvey Keitel as gangster Mickey Cohen.

Eric Christmas
as Ronald the Butler

Debrah Farentino
as Girl in Elevator

Anthony Russell
as Jerry the Bookie

Wendie Malick
as Woman on Train

Gary McGurk
as Tony the Waiter

[Beatty] tries to make Siegel humorous and glamorously suave, but Is defeated by the futility of the enterprise. This paranoid sadist is not a nice guy. He is not even interesting; merely a bully with a few colorful mannerisms.

What finally distinguishes Bugsy from other mob movies is its ever-present sense of the absurd.

Insouciant and flashy, co-producer Beatty is at his best when evoking the narcissistic, show-business side of Siegel.

A great deal of the fun of watching this very assured film is seeing with what energetic panache the actor takes on the mantle of the mobster J. Edgar Hoover once called "the most dangerous man in America."

The picture belongs, in every sense of the word, to Beatty.

Beatty and Annette Bening charge their roles with energy, and the supporting cast includes such talents as Harvey Keitel, Joe Mantegna, Ben Kingsley, and Elliott Gould in sturdy performances.

While Bugsy expertly captures the glamor of '40s Hollywood, it fails as the drama of a man whose dreams of glory lure him to an ignominious end.

A clump of casinos in the sand is evidence of something, but I'm pretty sure it's not greatness.

Oh, it's not that they cover up Siegel's brutal side, it's just that they undercut it by making the man just a victim of his own appetites, which is sort of like saying Charles Manson was just a little too enthusiastic about a certain Beatles tune.

While avoiding the usual gangster film clichés, director Barry Levinson also insists that Warren Beatty does more than coast through this movie on matinée idol looks and easy charm.

A true American classic. A masterpiece, plain and simple. One of the most entertaining and exhilerating gangster films ever made. A bold, stylish and remarkable portrait of a criminal. Director, Barry Levinson crafts an astonshing piece of work that will be remembered for years. It`s slick, thrilling, funny and wildly entertaining. A spectacular movie. A tremendouse all-star cast. Warren Betty is absolutely incrediable, he gives one of the greatest performances of his career, he gives a harsh, violent, charming and senational prtrayel. Annette Bening is wonderful. Bening and Betty set the screen ablaze with their thrilling chemistry. Ben Kingsley is brilliant. Harvey Keitel is excellent. Joe Mantegna is terrific.

Stylistically impressive but overlong portrait of the famous gangster. The supporting roles are filled with great actors doing fine work but the film rests on Beatty's performance and for the most part he delivers. As most biopics do this one plays with the facts but still tells an interesting story that's well directed it just could have used a little pruning.

Cab Driver: That's Bugsy Siegel's house. Harry Greenberg: He doesn't like that name. Cab Driver: Everybody calls him that. Harry Greenberg: Not to his face, they don't. A great mob story about the Gangster who created Vegas, made in a style that romanticizes this cold-blooded killer. Warren Beatty is very good as this charismatic gangster. Although Siegel was a murderer with a short temper, he is also shown to be a dreamer and a generally nice person, who falls in love with west coast living. The movie involves this mob boss coming to California, where he immediately loves the life there, moves into a big mansion, and tries to make it into show business. Siegel eventually gets involves with the two loves of his life, a movie starlet, Virginia Hill played by Annette Bening, and the idea of building a giant, legitimate casino resort setting in the desert city Las Vegas. Siegel eventually trade's in his marriage for Hill and uses more money than the mob would have possibly wanted on his big casino plan. During this time we learn of Siegel's ways, I say Siegel and not Bugsy because he would kill anyone who called him that name. We learn of Siegel's desire for great vanity, which includes fixing his hair, his strive for good grammar, and the fixation he has on why the newspapers portray him so harshly. The film also boasts an impressive supporting cast including Ben Kingsley as fellow mob boss Meyer Lansky, Harvey Keitel, Joe Mantegna, and Elliot Gould in one of his best and saddest roles. Director Barry Levinson does a great job handling this film, keeping the tone mostly light-hearted, despite some of Siegel's violent rages. It also looks great thanks to the art direction and costume design. And there's a very good score by Ennio Morricone, which is very fitting. While the story ends in a tragic way from a certain point of view, it still has many humorous moments, and is very entertaining throughout. The movie has a great supporting cast as well, providing what is needed. It is very stylish and gives a good perspective of how things were/could have been. Virginia: Do you always talk this much before you do it? "Bugsy" Siegel: I only talk this much before I kill someone. [they kiss]