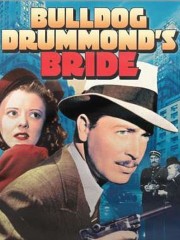 Bill T
February 14, 2015
One of the best Drummonds in my opinion. Hugh and Miss Clavering plan to get married, but a bank robbery get in the way. Nice breezy film higlighted by an exciting rooftop fight in the end.

Mara B
February 20, 2010
Bulldog Drummond finally gets hooked by his long time fiancee, but not without a struggle. Standard entry in the series with typically poor sound quality.

Steve M
½ August 3, 2007
Phyllis (Angel) gives adventurer Hugh "Bulldog" Drummond (Howard) one final chance to marry her, forcing the matter to the point where she has promised to marry another suitor on the day immediately following their scheduled wedding should the date be missed again. But, despite the efforts of their friends and families (regular returning cast-members Clive, Denny, Patterson, and Warner), a small-town French mayor with a deeply romantic soul (Mercier), this wedding plan may be foiled by the deadliest obsticle yet: A murderous, bomb-happy bank robber (Cianelli) in search of revenge and the 10,000 pounds of loot that he hid inside Phyllis' portable radio and which Hugh shipped to France.

Well, whether or not Hugh Drummond and his fiancee Phyllis actually manage to complete their nuptuials, "Bulldog Drummond's Bride" ends the Paramount-produced series with a bang! It features one of the series' most sinister villains--second only to the opponent that almost fed Colonel Nielsen and Hugh to a lion in "Bulldog Drummond in Africa"--and a weddding ceremony that's exactlyl the sort of pay-off that's called for, given how long it's been in coming.

It's a little dissapointing that the characters of Tenny (Clive) and Colonel Nielsen (Warner) are reduced to playing very small parts, but the trade-off of John Sutton's character (Colonel Nielsen's assistant in four of the films, referred to mostly as "Inspector Tredennis", but called "Jennings" in "Bulldog Drummond's Revenge") getting to play a larger role, and to even manage to be the one to make sure Drummond stays put long enough to give his final hope of marriage even the slightest chance of happening; and the hilarious, pompous small-town mayor/chief of police character portrayed by Louis Mercier more than make up for it.

Although this final step of Bulldog Drummond's Road to the Wedding is a little short of hi-jinx (the only truly funny bit is bank-robber Henri Armides tormenting of a confused Algy (Denny)--the wild energy of the film's final minutes brings thigs to a close on a very high note.

James H
July 3, 2007
Very good Bulldog Drummond entry in the series, one of the last ones. John Howard does well as the title character. Fine mystery, pleasant elements of comedy, short, sweet and fast paced.
Page 1 of 1