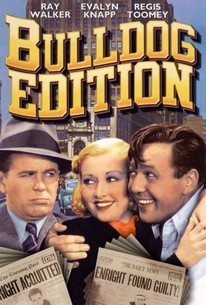 Based on Danny Ahearn's short story "Back in Circulation", Republic's Bulldog Edition stars Ray Walker as Ken Dwyer, two-fisted circulation manager for a great metropolitan newspaper. Though Dwyer's methods always attract customers, they are also the bane of the existence of dyspeptic managing editor Hardy (Regis Toomey). In addition, Dwyer and Hardy continually duke it out over the affections of staff cartoonist Randy (Evelyn Knapp). The story proper gets under way when Dwyer takes on a rival newspaper whose editor is in cahoots with gangster boss Enright (Cy Kendall). One thing leads to another, and before long Randy is kidnapped by the villains, necessitating an oversized shoot-out climax. From its impressive opening titles to its explosive finale, Bulldog Edition is four-star entertainment.

There are no critic reviews yet for Bulldog Edition. Keep checking Rotten Tomatoes for updates!

There are no featured reviews for Bulldog Edition at this time.