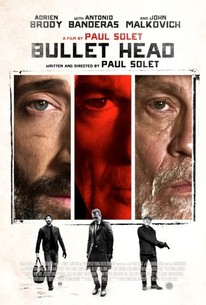 Oscar (R) winner Adrien Brody, John Malkovich, and Antonio Banderas deliver the action in this riveting crime story filled with pulse-pounding twists and turns. After a heist gone tragically wrong, three career criminals find themselves trapped in a warehouse with the law closing in. But, inside the warehouse, a more dangerous threat awaits-as the fugitives are plunged into a furious battle for their lives.

Ori Pfeffer
as The Handler

Tihomir Vinchev
as The Russian's Handler
View All

The Disaster Artist Is Certified Fresh

Malkovich has built a career mumbling his way through one disastrous movie after another, but this time he's got company.

Mostly, though, "Bullet Head" is about the characters and the crackling dialogue, and the first-rate actors giving just the right spin to their lines.

With too little freshness for crime-drama devotees, too many furry corpses for animal lovers and a thoroughly predictable wrap-up, Bullet Head ultimately screws the pooch

The film's main draw is its cast, all of whom have seen more illustrious career days but nonetheless can still deliver the goods.

A film that somehow manages to be fairly watchable, yet nonetheless really needed intervention from the conceptual stage onward.

Cujo for the new millennium?

Not as solid as it should have been. Bullet Head introduces itself as a different heist movie and ends up solving everything the easy way. [Full review in Spanish]

In spite of the promise it shows, Bullet Head comes up less than the sum of its parts.

Tightly contained, surprisingly emotional, and undeniably entertaining, Bullet Head is a film that should not go unseen.

Your mileage may vary on the potency of the message, but at least Solet preserves his vision, coming through with an unconventional thriller.

Bullet Head is an intense and frightening indie drama. After pulling a heist three criminals hideout in an abandoned warehouse but soon discover that it's an underground dog fighting ring, and that one of the dogs has snapped, having killed its owner, and is on the hunt. Featuring Adrien Brody, John Malkovich, and Antonio Banderas, the cast is pretty impressive. And, the writing does good job at developing the characters. The dialog in particular is especially strong. Still, the plot is rather thin and could be beefed up a little, and the directing could be better. Yet despite its problems, Bullet Head is a suspenseful crime thriller.

There are worse ways to spend your time than watching Oscar level actors figuring out how to best spend their time. But there are far superior crime-caper-gone-wrong movies you can spend your own on.

There's a certain breed of dog owner that takes enjoyment from placing treats near their animal and then uttering "wait for it". The entertainment value comes by how much control the owner exerts, how long can they keep the animal waiting against its own nature. Unfortunately, here is an entire film wrapped around just that tiresome premise, and the audience is the animal. The writer/director is telling one tale, but pauses frequently to tell another unrelated ditty, a pause that serves no purpose thematically. "He just did that just to do that," I realized, and was angry for the rest of the film. And he does it more than once. A lot of talent wasted here. Don't waste your time.