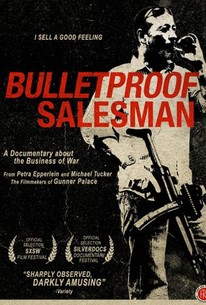 Fidelis Cloer is a salesman from Germany who has enjoyed a surprising windfall as a result of the long war in Iraq -- he works for a company that manufactures armored and bulletproof vehicles that have become popular with Iraqi officials and representatives of international firms doing business in the country. While war has boosted his business, Cloer resents being called a war profiteer, insisting (not incorrectly) that he's not selling weapons but safety, though as Iraqi guerillas become better at creating improvised explosive devices, his designers must constantly improve their vehicles to stand up to the destructive force. As Cloer puts it, We do not create the demand. The demand is here. Filmmakers Michael Tucker and Petra Epperlein, who previously looked at the lives of American soldiers in Iraq with their documentary Gunner Palace, profile Cloer and the business of selling a bit of safety in an unsafe land with their film Bulletproof Salesman. The picture was an official entry at the 2008 South by Southwest Film Festival.~ Mark Deming, All Movie Guide

Tucker and Epperlein seem pretty close to exhausting their cache of footage, though the resulting story isn't without interest.

Attempts to lose the nonstop spin of their aggressive hustler star, is no match for his slick promo sales pitch. And in a very different battle for turf between them, as to who gets to dominate screen time. In any case, his bomb security biz is boom-ing.

As if heading off criticism that the film could be perceived as an infomercial, Epperlein and Tucker formally foreground Cloer's talent, regularly branding the screen propaganda poster-style with Cloer's sales slogans, such as "Chaos is an opportunity."

There are no featured audience reviews yet. Click the link below to see what others say about Bulletproof Salesman!