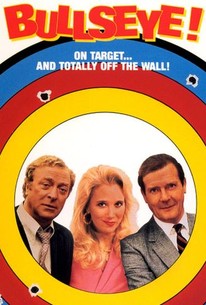 A hectic caper flick with farcical overtones, Bullseye! doesn't quite hit the....oh, you know. Government scientist Michael Caine and his titled pal Roger Moore plan to auction off a cold fusion formula to the highest bidder. Meanwhile, a pair of con artists-also played by Caine and Moore-impersonate the scientist and his friends in hopes of getting a piece of the action. This leads to an unending supply of comic complications, deadly encounters, wacky recurring characters and Sennett-style chases. Is louder and faster really funnier? You be the judge (but you'll have to catch the film on home video, since it never received a US theatrical release). Roger Moore's real-life daughter Deborah Barrymore shows up as a CIA agent.

Cliff Taylor
as Husband on Train

Lorraine Doyle
as Receptionist in Brothel

Dinah May
as Girl in Bar

Helen Horton
as Tourist on Coach

Petrina Derrington
as Courier on Train

Paul Mari
as Chef on Train

Graeme Elder
as Waiter in Mansion

Peter Clapham
as Waiter on Train

Ian Turbitt
as Punch and Judy

Mary Reynolds
as The Queen

John Cleese
as Man on Beach in Barbados

There are no critic reviews yet for Bullseye!. Keep checking Rotten Tomatoes for updates!

There are no featured reviews for Bullseye! at this time.