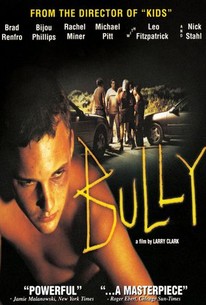 A film based on the true-life murder of Bobby Kent. Kent, a Hollywood, Florida teenager was murdered by his own circle of friends once they tired of being bullied by him.

Leo Fitzpatrick
as The Hitman

Irene B. Colletti
as Mrs. Puccio

What Clark does suggest in this confrontational work is a cultural condition in American suburbia by which relations between parents and children are strained or even nonexistent.

There's something troubling about a film which, on the one hand, wants to take a moral stance about a lost generation, and on the other relishes shooting the nubile flesh of its young actors.

The moral wasteland of suburban youth has been examined, earlier and better, in The River's Edge. Clark's leering leads nowhere: In Bully, he has nothing new to say, and, in the end, no real point to make.

Closer to teen pornography than to teen tragedy.

Clark's probing camera leers, but it also reflects truth, providing visions of a hard reality most of us would be unable to comprehend and unwilling to face.

Neither killers nor victim are drawn from life, just from lurid teen-exploitation pictures past.

...an exploitation teen movie in the pejorative sense of the word.

Much too concerned with flashing nude scenes of its barely legal cast to make a point or unfold a story.

Clark is not a moralist, which is good, but he is not much of a dramatist either. You get the impression that the fascination with youth in his movies, just like in his photos, provides an excuse for voyeurism.

A bit long and repetitive.

'Bully' demands attention for the way in which it forces us to watch and digest a dark slice of American society. American beauty this ain't.

'Bully' gives the viewer an insight into a group of maddeningly awful young people. They're much like the characters from a Bret Easton Ellis novel, only these ones are of a slightly later generation, meaning there is a marked 'wannabe black/rapper' theme amongst the group, which is laughably contrived. Their incessant exchange of conversation, which seldom exceeds excessive swearing or needless use of the word 'like', often becomes grating. The characters are so devoid of any intelligence and have such warped attitudes towards violence and sex that it makes you question whether people this retarded exist - worryingly, if you go to the right area, they do. The first half of the film is crude trash; however it is well-acted crude trash. I wanted to hate the film because I hated every character, but the characters were clearly purposefully constructed to be that way. To hate the film for its ugliness could be deemed as missing the point, I suppose the film acts a cautionary tale, showing what some areas of society can devolve into. In this respect, it 'succeeds'. Its chief success is how it portrays the ugly messiness of violence; it covers a spectrum of emotions from its characters during the visceral, realistically unpleasant climax, a scene that's very well constructed by the preceding twenty minutes or so. However, Larry Clark's trademark perversion is all over this film, paying gratuitous attention to the bodies and sex of the teenage cast. It's ultimately rather one-dimensional; its narrative of murder is captivating, but its study of reckless, idiotic culture is unnecessary - viewers are already aware of people like this. Its absence of any likeable characters and presence of many detestable ones overshadows the film's merits of decent acting and engaging murder plot. There is essentially no incentive to watch this film, 'Bully' is just another instalment in Clark's portfolio of attention seeking controversy.

A powerful true to story drama, Bully is a stunning and very dark film. With a great cast of actors, director Larry Clark crafts a memorable drama that is hard to watch as you see a group of teenagers plot to kill one of their friends who is physically abusive and who has raped one of their friends. As the abuse becomes harder to bear, the teens are more determined to kill Bobby Kent who is the one who abuses all of them. The film goes deeper into dark territory as you see everyone fed up with the way Bobby Kent treats everyone. Kent is brilliantly played by Nick Stahl who gives a riveting and brutal performance. Brad Renfro plays Marty Puccio, Bobby Kent's best friend and main target of his abuse. I really enjoyed the film, but I felt it was pretty hard to watch at the same time. The performances are top-notch and Bully is a dark, gritty in your face type of film. This is not a film for everyone. The strength of the film lies in the powerful acting, directing and story. If you're looking for a powerful drama film, then give this one a shot. The film is brutal, and quite depressing, but nevertheless, is a terrific film that has a wonderful cast of actors who light up the screen with their presence. This is not a perfect film, but there's enough going on on-screen to make it worth watching. Bully is a very good film that explores the darkest corners of revenge and it does very well enough to keep you interested till the very end.

Essentially, this is one hell of a disturbing film. But what makes this even more shocking is the direction of Larry Clark and the dark, gritty way the film is shot. Based on a true story, this film is one that holds nothing back and is disturbing enough to make A Clockwork Orange look tamed. Yet, I find myself loving this film every time I watch it. What can you say? I like good film even if it is this extreme. As I said, this film is based on a real murder case in the 1990's that involved a group of friends brutally murdering one of them due to his psychotic, brutal, and completely sadistic tensions he posses. I heard about this film one night when I was flipping through the channels on TV one night and I just happen to see the ending. Right when it was revealed what had happened to the real people that this film is based on, I was hooked. But the more I looked into this film, the more I got sucked in, the more deranged and disturbed I became until I sat down and watched this film. My main reaction at the end was that I was sick and disgusted by what I saw. I guess it was due to me seeing this film at a young age and not mentally ready to deal with this film's subject matter. Later on when I rewatched this film, I saw it as a masterpiece in a very twisted sense of the word. When I call this film a masterpiece, what I mean is the audacity to create a film that shows explicit scenes of teenage sex, rape, drug usage, and complete chaos without sugar coating anything. What I also mean is the performance of the cast as they tackle this film. Watching what they had to do, I would not doubt it that they were all disturbed with what they had to do. These kids had balls and while a few of them did not act well, they still all gave this film a power that has yet to be matched in my opinion (in terms of young actors). But one kid that I feel the need to talk about is Nick Stahl as the titular 'Bully': Bobby. As I have mentioned in other reviews I have written for this site, my second favorite film of all time is A Clockwork Orange. When I saw Nick Stahl's performance in this film, I was beyond reminded of Malcolm McDowell's performance as Alex DeLarge in A Clockwork Orange. Both characters are young, they both obsess over torturing people and raping others just for fun, and they are both the most sadistic bastards you can imagine. But what makes DeLarge likable in a sick sense is how he changes throughout Clockwork. With Bobby, you can't. He is just hateful and despicable, and I love hating him in this film. But with acting, Stahl does an excellent job with this character, but I would of personally liked it if we were able to see more sides to his character. That is my main complaint with this film: the characters represent only one emotion: either scared, pissed, horny, or evil. I would of loved it if I could of seen more shades to the characters and be able to grow into them all. But, Clark had a story to tell and went with that route for some reason and as such, I will just accept it. Larry Clark is the type of director that I admire. This and his previous film Kids (a film that is true horror) shows the true underside of teenagers this day and age. His film also have that feel of being eternal due to how real these films get as they age. Back when they were released, it looked kind of true, but now these films are reality. With him basing all of his films on people he knows and/or news reports, what you see in his films is as extreme as they get. With Bully, this might be his most tamed film, and that means nothing. By no means is Bully a film for children. If anything, Bully is a film that should be shown to high school students and anyone older. With the rising problem with bullying among teenagers, this film is a wake up call to people, telling them that this is real and this does actually happen. But as a regular film, prepare to be disturbed. A wonderful portrait.

Based on a true story, this is a teen story with a difference. Sexually charged and drug fueled teens seek revenge on the bully who controls them and don't quite think their plan through. Watching the uncut version of this, certainly highlights the extreme levels of bullying and control, which you may otherwise not experience with the uncut version.