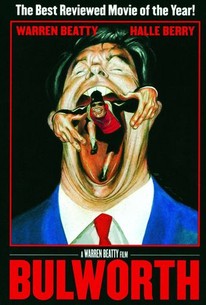 Critics Consensus: Star and director Beatty's ambitious take on race and politics in 20th-century America isn't perfect, but manages to provide more than its share of thought-provoking laughs.

Critics Consensus: Star and director Beatty's ambitious take on race and politics in 20th-century America isn't perfect, but manages to provide more than its share of thought-provoking laughs.

Critic Consensus: Star and director Beatty's ambitious take on race and politics in 20th-century America isn't perfect, but manages to provide more than its share of thought-provoking laughs.

Warren Beatty directed, co-produced (with Pieter Jan Brugge), co-scripted (with Jeremy Pikser), and stars in this political satire, a comedy drama about a U.S. senator who decides to start speaking the truth. Despondent California senator Jay Bulworth (Beatty), up for re-election, is disillusioned by the usual campaign banalities; his marriage to Constance (Christine Baranski) seems equally hollow. In the midst of a nervous breakdown, Bulworth goes without sleep or food for three days and takes out a ten-million-dollar insurance policy on himself while arranging his own assassination. Drinking during a return to Los Angeles, Bulworth is scheduled to speak at an African-American church in South Central L.A. Once there, he tosses aside his prepared speech, startling both the audience and his campaign manager, Murphy (Oliver Platt), by improvising truthful remarks instead of the familiar rhetoric. These loose-cannon salvos gain the attention of an attractive young woman, Nina (Halle Berry). Bulworth finds an exhilaration with this new freestyle approach, and after shocking a gathering in Beverly Hills with further fulminations, Bulworth invites Nina and her girlfriends into his limo. During a spaced-out sojourn at one of South Central's more frenzied after-hours clubs, Bulworth gains respect for hip-hop culture.Still reeling from insights gained by this nightlife, he arrives the next day for a fundraising function at the Beverly Wilshire, startling everyone with a diatribe delivered in the intonations of a rap artist. His interest in Nina and his new optimistic outlook on life give Bulworth a sense of elation and a will to live. He phones to call off the hit, but the gears have been set in motion. After an assumed hitman turns up during a church appearance, Bulworth flees, and Nina offers him a safe-house hideout at the home of her family, veterans of the civil rights movement. Here Bulworth goes through the final steps in his transformation -- making a Kennedy-styled connection with the disenfranchised as he tunes in to forgotten memories of the '60s. Outfitted in homeboy clothing, the born-again Bulworth heads for a TV station to unleash even more caustic comments on the American political scene. ~ Bhob Stewart, Rovi

Jann Carl
as Herself

Dave Allen Clark
as Himself

Jerry Dunphy
as Himself

Robin Thomas
as Reporter in Hallway

Sheryl Underwood
as Woman at Frankie's

Lee Weaver
as Man in Church 2

Sumiko Telljohn
as Lady at Banquet

George Hamilton
as Himself

Paul Mazursky
as Himself
View All

It's a sharp, brave movie, a little ragged around the edges, but that's to its advantage.

What gives Bulworth its unique character is that all this silliness is periodically punctuated by cogent, carefully thought-out mini-manifestos...

Bulworth is an angry movie, but Beatty is savvy enough to recognize that people respond better to comedies than serious "issue films," so he has camouflaged his message beneath the surface of this original, incisive satire.

A shrewd political observer for decades, Beatty has fashioned a hilarious morality tale that delivers a surprisingly potent, angry message beneath the laughs.

Bulworth plays like a cry of frustrated comic rage. It's about an archetypal character who increasingly seems to stand for our national mood: the guy who's fed up and isn't going to take it anymore.

As writer, director and star, Beatty flails all over the screen, but he's also made the only recent political satire that draws blood.

...has a dynamic, if not revolutionary view of the political world, leavened with jokes and complete with a shock ending...

Bulworth is an angry and politically astute film. More than that, it is in many ways a liberating film.

Beatty is to be congratulated on even attempting to prick America's conscience in these conservative times, but the real reason for seeing it is the panache with which it captures the irresistible flash and filigree of American politics.

This charming, Capraesque political fable demonstrates the viability of Warren Beatty as writer, director and star; it's his last decent film.

Smug but fun political satire for adults only.

Manages to courageously and seriously address political issues head-on while remaining a funny and entertaining romp.

One of my all time favorite movies ever. Engaging characters, great humor, and poignant political satire (if you listening closely to Warren Beatty's raps).

Bulworth is basically having a midlife crisis and decides to have himself assassinated. Because of this, he doesn't have to care about anything, so he starts to tell things like they are to everyone. At first it's shocking, but then people accept it and embrace. Meanwhile, Bulworth has taken a liking to black culture and channels his energy through that. The supporting cast fits well, and Warren Beatty is great. He wrote, directs, stars, and raps in this movie and it's hilarious.