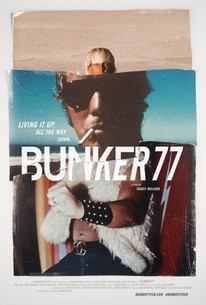 Bunker77 is the wild true story of a young American rebel seeking freedom, love, and authenticity in a chaotic world. Bunker Spreckels, Clark Gable's stepson and heir to a sugar fortune, turned his back on expectations and grew into a controversial surf star who expressed complete originality, like a cross between James Dean and Andy Warhol. He danced on the sea like no one else even as his mysterious and surreal persona exploded to consume him. Bunker survived off the jungle while pushing the limits of Hawaii's most dangerous waves, raced across remote Africa in a Mercedes waving cash and a handgun on a pioneering expedition to J-Bay, and churned his way through a Los Angeles filled with passion, decadence, and reckless experimentation. While Bunker mentored skateboard legend Tony Alva to his world championship and dove headlong into collaborations with film auteur Kenneth Anger, his dynamic life blazed to uncontainable proportions.

Bunker77 is yet another paean to a reckless, instinctive ground-breaking whose own stylistic stance is familiar to the point of cliche.

There are no featured reviews for Bunker77 at this time.