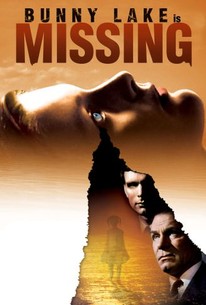 Based on the mystery novel by Marryam Modell (using the pseudonym Evelyn Piper), Bunny Lake Is Missing is a bizarre study in motherhood, kindness, enigma, and insanity. Ann Lake (Carol Lynley), an American freshly relocated to England, wishes to drop off her daughter Bunny for the girl's first day at a new nursery school. Oddly, Ann cannot locate any teachers or administrators, only the school's disgruntled cook (Lucie Mannheim). She is forced to leave Bunny unsupervised in the building's "first day" room, under the reassurance that the cook will be responsible for the child. When Ann returns in the afternoon, the cook has quit and Bunny Lake is missing. The school's remaining employees vehemently deny ever seeing the child, and Ann desperately calls her older brother Stephen (Keir Dullea) for help. Ann was raised fatherless and never married; she and Bunny have lived under Stephen's care and protection for the majority of both their lives. Stephen is enraged by the irresponsibility of the staff, but as Scotland Yard begins its investigation, it comes to light that he had never officially enrolled a child at the school. When Police Superintendent Newhouse (Laurence Olivier) begins to unravel the Lakes' lives and search their belongings, he discovers that not only did Ann once have an imaginary childhood daughter named "Bunny," but that the young Bunny seemed to have no tangible possessions at the Lake apartment. Bunny Lake (whom we have yet to see onscreen) may not be missing: she may not even be real. Terrified that Newhouse will now abandon the search for the girl, the hysterical Ann sets out to prove her sanity and, in the process, surprisingly uncovers the true psychosis behind the disappearance of her little Bunny Lake.

Percy Herbert
as Policeman at Station

Fred Emney
as Man in Soho

John Forbes-Robertson
as Attendant
View All

Upon contact with an electric guitar, Otto Preminger, born in 1906, got a shock, which he conveys in this jangled psychological thriller from 1965, set in swinging London.

The effect is stingingly poignant.

Every now and then, give me a good, nerve-grating detective mystery to perk up the pulse, clear the head and keep the fingernails down to size... [Bunny Lake Is Missing] has about all the requisites I demand of such films.

Like Hitchcock in Psycho, Preminger is playing upon our fears of the irrational, seemingly motiveless crime. But Preminger's film is at once more effective and more sadistic.

Bunny Lake is Missing is a victory of form over content, of a great filmmaker surpassing the limits of their source material.

...a promising thriller that slowly-but-surely wears out its welcome.

One of Preminger's best films, this stylish psychological mystery-thriller is extremely well shot and well acted by Olivier, Carol Lynley and Keir Dulea.

Somehow the unconvincing story is engrossing, as the marvelous supporting cast put it over... .

Olivier is excellent as the analytical inspector, his easy-going grace a delightful contrast to the two stars.

Whenever I watch a good film and don't like it, I feel like I'm missing something. And this was one of those moments. Okay, not entirely true, I liked *parts* of it. The ending. Oh my god. Painful. I dunno. Mixed.

umm wtf? one of the most ridiculous 'thriller's i've seen. the americans were just embarrassing, especially in the final scene. olivier can do no wrong and noel coward was hilarious but otherwise i'm pretty sure i laughed at all the wrong parts. still entertaining in a perverse kind of way

Great performances (namely Lawrence Olivier), incredible titles by Saul Bass and even better direction from Otto Preminger who delivers 25 of the most jarring final minutes (MUCH of which is owed to Fritz Lang) I've seen in a movie to date. Bunny Lake is Missing is an all-around creepy movie with everything from the brother/sister relationship, that landlord with that chihuahua to the secondary cast. It seemed to shift gears a lot and often made me wonder if they were going to go to the proverbial "there." I felt gypped when The Zombies were finally shown (I'm a big fan) and I truly despised the movie's score. Worth it for the ending, but be warned--this movie does take a while to get going.