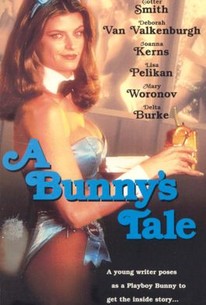 A Bunny's Tale is a TV-movie adaptation of Gloria Steinem's experiences as a Playboy bunny. Engaged by a magazine to write an investigative article on publisher Hugh Hefner's nightclub chain, Ms. Steinem (Kirstie Alley) poses as a young girl named "Marie" and enters the Bunny training program at the New York Playboy club. Outfitted with phony ears, fuzzy tail and revealing costume, Gloria learns the proper method of serving drinks (the "bunny dip") and how to fend off customers who ignore Hefner's "look but don't touch" policy. She also concludes that being a sex object, even a chaste one, is depressingly demeaning -- an "awakening" which, according to this film, leads to Steinem's feminist activism of the 1960s and 1970s. By the time it made its February 25, 1985 debut, it was beating a dead rabbit: the glory days of the Playboy Philosophy had long passed, and most of the once-thriving "bunny clubs" had gone out of business.

Critic Reviews for A Bunny's Tale

There are no critic reviews yet for A Bunny's Tale. Keep checking Rotten Tomatoes for updates!

There are no featured reviews for A Bunny's Tale at this time.