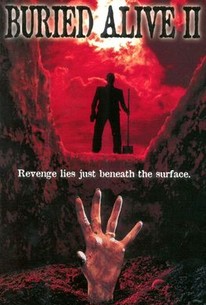 This made-for-cable sequel to the 1990 TV-movie thriller Buried Alive picks up where the earlier film leaves off, with the death of the sheriff who solved the mystery in the original. Old Sam has left his money (a hefty sum indeed) to his niece Laura (Ally Sheedy), who is married to a no-account named Randy (Stephen Caffrey). Hoping to get his mitts on all of Laura's dough, Randy conspires with his mistress Roxanne (Tracey Needham) to arrange an "accidental" demise for his unwitting wife. On cue, Laura dies after consuming a poisoned meal, the authorities are satisfied that no foul play has occurred, and the girl's body is shipped off to the embalmer. Thanks to a power outage, the embalming process is halted and Laura is buried "intact" -- and of course, still alive! Once she's dug herself out of her grave, Laura embarks upon a campaign of vengeance, aided and abetted by a shadowy stranger who turns out to be the "murder victim" from the earlier Buried Alive, Clint Goodman (played again by Tim Matheson, who also directed this film). Entertaining in its own "they liked it once, they'll love it twice" fashion, Buried Alive II premiered February 4, 1997, on the USA network.

Brian Libby
as Lewis the Embalmer

There are no critic reviews yet for Buried Alive II. Keep checking Rotten Tomatoes for updates!

It's a lot like the first film, except this time a woman (Ally Sheedy) is poisoned and buried alive by her husband. She digs herself out and yes...she wants revenge. The movie is entertaining and watchable but it's not that much different than the first film.

The sequel thriller shows different opposite sex of a woman who returned from dead, buried alive and comes for revenge like Tim Matheson's character from the original who also appeared in this film.