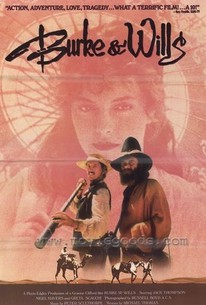 Based on a true story, this film tells the tale of Robert O'Hara Burke (Jack Thompson) and William John Wills (Nigel Havers), who in 1860 set forth to create the first accurate maps of the interior region of the Australian continent. To this end, Irish explorer Burke and British scientist Wills journeyed from the Southern coast of Carpenteria to the North. While they succeeded with the first part of their voyage, on the return trip they and their compatriots fell victim to intense heat and diminishing supplies of food; of the 19 men who began the expedition, only one survived to tell the tale. However, while fate was cruel to Burke and Wills, history was kind, and their story is still taught in every Australian classroom. Graeme Clifford's biopic was praised for its striking visuals and realistic portrayal of Burke and Wills' difficult journey.

Martin Redpath
as Mayor of Melbourne

... runs short of plot even before the explorers run short of water.

There are no featured reviews for Burke & Wills at this time.