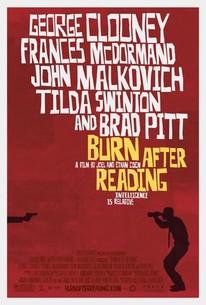 Critics Consensus: With Burn After Reading, the Coen Brothers have crafted another clever comedy/thriller with an outlandish plot and memorable characters.

Critics Consensus: With Burn After Reading, the Coen Brothers have crafted another clever comedy/thriller with an outlandish plot and memorable characters.

Critic Consensus: With Burn After Reading, the Coen Brothers have crafted another clever comedy/thriller with an outlandish plot and memorable characters.

At the headquarters of the Central Intelligence Agency in Arlington, Va., analyst Osborne Cox arrives for a top-secret meeting. Unfortunately for Cox, the secret is soon out: he is being ousted. Cox does not take the news particularly well and returns to his Georgetown home to work on his memoirs and his drinking, not necessarily in that order. His wife Katie is dismayed, though not particularly surprised; she is already well into an illicit affair with Harry Pfarrer, a married federal marshal, and sets about making plans to leave Cox for Harry. Elsewhere in the Washington, D.C., suburbs, and seemingly worlds apart, Hardbodies Fitness Centers employee Linda Litzke can barely concentrate on her work. She is consumed with her life plan for extensive cosmetic surgery, and confides her mission to can-do colleague Chad Feldheimer. Linda is all but oblivious to the fact that the gym's manager Ted Treffon pines for her even as she arranges dates via the Internet with other men. When a computer disc containing material for the CIA analyst's memoirs accidentally falls into the hands of Linda and Chad, the duo are intent on exploiting their find. As Ted frets, "No good can come of this," events spiral out of everyone's and anyone's control, in a cascading series of darkly hilarious encounters.

Dermot Mulroney
as Star of 'Coming Up Daisy'
View All

News & Interviews for Burn After Reading

Is Burn After Reading the Most Coens-y Coen Bros. Movie Of Them All?
Creed, Paddington, and More Available to Stream on Netflix and Amazon Prime
RT Interview: Tilda Swinton on Julia

View All Burn After Reading News

Critic Reviews for Burn After Reading

Burn After Reading is a comedy that makes fun of almost everything, reminding you that almost none of it is laughing matter.

These are functioning morons, they walk and work among us. And they are brilliant and funny and in spite of the screwball-comedy nature of the story, they are completely believable.

, Frances McDormand might get nominated for an Academy Award in a supporting role. She was great.

It's morbidly absurdist, thoroughly pointless, and can certainly be funny at times.

It's surely old-hat by now to note the writer/directors' pervasive condescension and smugness, a criticism I don't think always holds true, especially when the Brothers more fully explore, e.g. The Man Who Wasn't There, their no less ubiquitous spi

The Coen Brothers [return] to their comedic-crime roots... with engaging and ebullient results.

I know I am about to commit film critic heresy, but I found the film's overly clever story left me cold.

Learning a valuable lesson isn't a necessary component in being highly entertained.

The Coen brothers find a way to mix both political thriller and dark comedy in Burn After Reading to give us a beautiful piece of cinema.

The joy of a Coen Brothers film is that it IS confusing, yet somehow always remains coherent.

Audience Reviews for Burn After Reading

This film is just fun and funny. A Coen Bros classic that can't be missed. The characters are expertly drawn and the alluring, winding plot is enjoyable. Great performances from the entire cast. Possibly the least dark Coens' movie.

Another fantastic outing for the Coen Brothers whose quirks and kookiness add charm and additional laughs with repeat viewings. Featuring outstanding work from an all-star cast, the Coen Brothers craft memorable characters and situations that will stick with me forever. I haven't laughed as hard as I do at any other movie in recent memory. The plot is ludicrous and hysterical in equal measure and has the right amount of stupid and smart to work. It won't be everyone's cup of tea, but I consider Burn After Reading a dark comedy masterpiece.

An insanely hilarious melange of comedy and thriller as one would imagine from the Coen Brothers, with a bizarre story full of characters who are stupid beyond comprehension and great performances by its whole cast, especially Brad Pitt stealing the scene.

When it comes to Burn After Reading, it seems the Coens are just pulling things out of thin air. Guess what? It works just fine. Reading the plot-line is one thing, but watching 90 minutes of a lost disk is something else. There is so much intertwining going on, it is surprising how this film never gets as confusing as it sounds. Head-scratching perhaps, but not confusing. The banter from the characters is highly entertaining. In fact, this is one of the areas where this picture excels. The constant barrage of the F word is worth the price of admission. There are a number of noticeable faces. John Malkovich and Brad Pitt get a lot of points for their characters. J.K. Simmons makes the most of his minutes as well. Burn After Reading is an example of a recommendable comedic drama. "Report back to me when it makes sense."