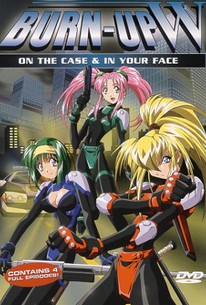 Too silly to work as a police series, but too violent to play as a comedy, this over-the-top series vacillates between extremes but never achieves a satisfactory resolution. The Warrior Strike Team represents the elite of the Tokyo police force in the not-too-distant future. Except for Yuji, the lone, ineffectual male, its members are women who seem to specialize in skimpy outfits: blond heroine Rio, sharpshooter Maya, computer expert Lelica--aided by techno-wizard Nanvel and shrewd commander Maki. They're pitted against a gang of ruthless criminals who have created a "virtual drug," a sort of electronic mind-control system. The screenplay by Katsuhiko Kochiba and Sumio Uetake tries to build suspense, then undercuts it with slapstick sexual humor and vice versa. Episode 3 begins with the perennially broke Rio trying to sell her used underwear to a sex-shop dealer but ends with a violent bloodbath in which her best friend is killed. When Rio sobs over her friend's murder, it's staged so that the camera is peeking up her skirt. Many anime series successfully juggle comedy and violent conflicts (Cowboy Bebop, Gunsmith Cats, for example) but Burn-Up W never gels. Suitable for ages 18 and up: nudity, profanity, sexual humor, violence, violence against women. --Charles Solomon

Critic Reviews for Burn Up W

There are no critic reviews yet for Burn Up W. Keep checking Rotten Tomatoes for updates!

Audience Reviews for Burn Up W

There are no featured audience reviews yet. Click the link below to see what others say about Burn Up W!