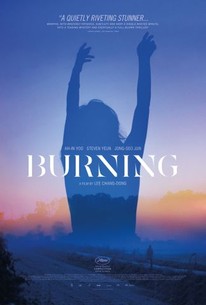 Critics Consensus: Burning patiently lures audiences into a slow-burning character study that ultimately rewards the viewer's patience -- and subverts many of their expectations.

Critics Consensus: Burning patiently lures audiences into a slow-burning character study that ultimately rewards the viewer's patience -- and subverts many of their expectations.

Critic Consensus: Burning patiently lures audiences into a slow-burning character study that ultimately rewards the viewer's patience -- and subverts many of their expectations.

BURNING tells the story of three individuals and a mysterious incident they experience. Jongsu bumps into an old friend, Haemi, on a part-time delivery job. Haemi asks Jongsu to take care of her cat while she leaves on a trip to Africa. When she returns, Haemi introduces Jongsu to Ben, a man she met in Africa. One day, Ben and Haemi pay Jongsu a visit, and Ben reveals his secret interests to Jongsu.

Burning...refers to the resentment and the anger felt by the young and struggling towards the rich and overbearing. Revelations like these hover just beneath the surface of this beautifully directed mystery.

Lee hypnotises with his story of a love triangle, crafting a movie that could be described as visual poetry.

This is the kind of film that all but demands a second viewing in order to appreciate the complex elegance of the design, assembled from details systematically calculated to lend themselves to more than one interpretation.

Wave your lighters in the air. This bleak movie is one of the year's best.

It's chilling and brilliant.

Burning casts such a strange spell.

Episode 20: When Jeff Tried To Save The World / Creed II / The Ballad of Buster Scruggs / The World Is Yours / Burning

Characters and viewers are taken on a journey that both fascinates and unsettles.

Burning is a slow-burn thriller that is utterly captivating from beginning to end. It's economic emasculation that brings inevitable violence. It's Lee's script that shines: layered with hefty metaphors and symbolism, yet the film is surprisingly subtle.

It unfolds like a poem in its esotericism, wearing the ambiguity on its sleeves that make for something almost entirely transfixing.

It's an epic, eloquent, lyrical, stunningly lensed (by Hong Kyung-pyo) tragedy that will likely be one of the toughest films of 2018 to shed.

Ostensibly this is three kinds of movies in one . . . a character study, a mystery, and a revenge thriller and yet each of these classifications fail to adequately describe all or even part of "Burning" as Chang-dong Lee continually undermines or subverts your expectations. It's a haunting enigma

KOREAN BBQ - My Review of BURNING (4 Stars) It may sound corny as hell to call South Korean filmmaker Chang-dong Leeï¿ 1/2(TM)s BURNING a slow burn, but thereï¿ 1/2(TM)s no escaping the truth. To also call it a worth-the-wait psychological thriller about obsession in the vein of VERTIGO, THE CONVERSATION, DONï¿ 1/2(TM)T LOOK NOW and, improbably, MIKEï¿ 1/2(TM)S MURDER, also fits the bill. Be forewarned, however, that at 148 minutes, itï¿ 1/2(TM)s l-o-o-o-o-o-n-g but also exceptionally rewarding. Depending on how you look at it, itï¿ 1/2(TM)s either the story of a young woman who asks an old friend to take care of her cat while sheï¿ 1/2(TM)s away, or itï¿ 1/2(TM)s about said old friendï¿ 1/2(TM)s obsession with a woman he barely knows and the potentially dangerous new boyfriend she meets while away. Either way, thereï¿ 1/2(TM)s that damned cat and pay attention to it, as itï¿ 1/2(TM)s a very important piece of the puzzle. Ah-in Yoo plays Lee Jong-su, the young man, who when we first meet him is making a delivery to an electronics store where his old acquaintance Shin Hae-mi (Jong-seo Jun) dances out front to lure customers inside. Although he called her ugly when they were young, sheï¿ 1/2(TM)s drawn to this quiet, vulnerable man and aggressively hits on him and eventually gets him to agree to watch her cat in her tiny apartment while she jets off to Africa for a vacation. Hae-mi isnï¿ 1/2(TM)t your classic noir femme fatale like Kathleen Turner in BODY HEAT. Sheï¿ 1/2(TM)s a lot more idiosyncratic and rough around the edges, but her somewhat goofy, oddball character stands out and it seems clear that no good will come from this dalliance. Sure enough, they have sex and he sets about taking care of a cat he (and we) have yet to see. Itï¿ 1/2(TM)s the first of many instances where we as viewers begin to question whatï¿ 1/2(TM)s real and whatï¿ 1/2(TM)s not. Hae-mi has a wonderful and revealing moment in which she shows off her miming skills. It feels off-the-cuff, but what she has to say about perception is a key to viewing this film. Hae-mi returns from her trip with a new boyfriend of sorts, Ben (played by Steven Yeun of THE WALKING DEAD fame). Unlike Jong-su, Ben has money, a fancy car, a to-die-for apartment, and the kind of swagger we all wish we had but are too afraid to actually pull off. Eventually they form a throuple of sorts, culminating in a strange evening in which Hae-mi strips down and dances in the sunset and where Ben confesses to Jon-su that he sometimes likes to burn down greenhouses and that one near Jong-suï¿ 1/2(TM)s family home is his next target. Huh? What? Did we just hear that correctly? Who knows, but by this time, the film has slowly managed to seduce us with its low key, hangout charms. Of course, all is not what it seems, and when Hae-mi disappears, Jong-su canï¿ 1/2(TM)t help himself but to obsessively search for her, with Benï¿ 1/2(TM)s behavior becoming increasingly more suspicious. Although the aforementioned films resonate here, MIKEï¿ 1/2(TM)S MURDER, the 1984 Debra Winger starrer from James Bridges, feels like a kissing cousin to BURNING more than the others. Both feature a troubled protagonist who oh-so-slowly obsess over and search for someone they barely knew and both manage to explain everything while still retaining their ambiguity. BURNING excels as an of-the-moment dissection of millennial impotence and a yearning desire to connect while possessing none of the tools for how to accomplish such a thing. All three of its leads give wonderful performances with Yeun putting a fresh spin on his Talented Mr. Ripley-esque character. Is he a sociopath or just your garden variety narcissist? The film forces you to read into his every yawn and blank but seductive charms. Meanwhile, Ah-in Yoo performs the hell out of his naive street kid who has his own hidden demons and unexpected sexual desires. Jong-seo creates such a specific character that even when sheï¿ 1/2(TM)s not onscreen, you feel her pull. Chang-dong Lee gets incredible help from his talented cinematographer, Kyung-pyo Hong, who creates one dreamy image after another, especially that astounding final shot. That this film slyly goes from a quirky drama to a full-blown thriller without any odd tonal shifts speaks to the talents of all involved. It feels like a muffled scream at disaffected youth and how their obsessions lead them to poorly solving their problems. Donï¿ 1/2(TM)t read too much into this. Itï¿ 1/2(TM)s also just a creepy, sad, weird, dreamy experience.

The best film of 2018, Burning is an undeniable masterpiece. Yoo Ah-In and Steven Yeun deliver bravura performances, and the haunting film stays true to its Murakami roots while also forming its own identity as an engaging, modern thriller. It is a film that captivates, not only with the story itself, but with the visuals, the sounds, and the camerawork. It is one of the greatest films I have ever had the pleasure of watching in a movie theater.