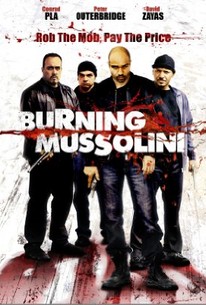 Love saves a man from his worst instincts while leading him right back into them in this independent comedy-drama. Paul (Conrad Pla) left behind a failing career as a boxer and a long history of shady behavior when he fell in love with Cheryl (Chelah Horsdal), who works as an editor for a publishing house owned by her family. With Cheryl's encouragement, Paul has been pursuing a new life as a writer, but while he's enjoyed critical success, lately he's been cursed with severe writer's block. Feeling like a failure compared to Cheryl, Paul wants to prove his worth to her by giving her a world-class wedding with all the bells and whistles. However, with his productivity stalled he's short on money, so he comes up with a scheme to raise the cash for the big event -- pulling a massive scam on "Mussolini" Bonnacci (Dino Valiotis), the wealthy leader of a local drug dealing operation. While Paul's old cronies are sure they can pull off the job, nothing goes quite the way they expected. Burning Mussolini was the first feature film from actor turned writer and director Conrad Pla. ~ Mark Deming, Rovi

There are no critic reviews yet for Burning Mussolini. Keep checking Rotten Tomatoes for updates!

There are no featured reviews for Burning Mussolini at this time.