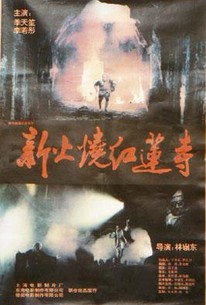 Tsui Hark produces and Ringo Lam directs this bleak kung-fu action thriller. Qing dynasty era martial arts heroes Fong Sai Yuk (Willie Chi Tian-sheng) and Hung Hei-kwun (Yang Sheng) are students at the Shaolin temple when the government decides that the celebrated monastery is a threat to imperial power. Ordered to disband, the disciples of the temple are rounded by imperial troops led by the evil General Crimson (John Ching Tung) and sent to the dreaded Red Lotus Temple, a cavernous underground complex filled with booby traps and other nastiness. The place is run by the pathologically debauched Elder Kung (Wong Kam-kong), who not only has a taste for painting with human blood but also for having his way with his large collection of embalmed women. Along the way, Fong Sai Yuk falls for former prostitute and fellow inmate Tou Tou (Carmen Lee Yeuk-tung) while Hung Hei-kwun considers renouncing his Shaolin vows and allying himself with the villainous Kung. ~ Jonathan Crow, Rovi

There are no critic reviews yet for Huo shao hong lian si (Burning Paradise in Hell). Keep checking Rotten Tomatoes for updates!

Burning Awesomeness! An excellent martial arts extravaganza from the ever reliable (I even like his Van Damme flicks) Ringo Lam with lots of creepy and gory moments. I take it this is based on one of Fong Sai Yuk's (also played by Jet Li in other films) many adventures, and judging from the 2 movies I've seen with the character, I wants more! Great, intense stuff with booby traps in an unescapable fortress and an indestructable villain, and above all, honour and friendship whilst kicking ass.

I like the popular martial arts character Fong Sai-yuk in this thriller epic film who fights against the government from hell.