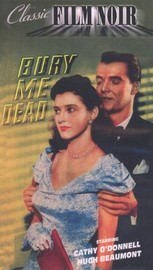 Super Reviewer
Bruce B
½ May 9, 2013
An inferno against a night sky opens Bury Me Dead, with the whinnying of high-strung horses as they're being led from their burning stable. Still inside the tinderbox, all those present assume, is a well-to-do young married woman (June Lockhart). But later, at the burial, a mysterious veiled mourner hitches a ride home with family lawyer Hugh Beaumont and reveals herself to be the presumed contents of the casket.

She does her own version of the dance of the seven veils by dramatically appearing to her various survivors, who greet her re-emergence with a multicolored outbursts of consternation, shock and relief. (Lockhart's such a sweetie she can't bring this off with the panache it demands.) Among the surprised are her husband Mark Daniels, whom she suspects of setting the fire, and her spoiled and wilful kid sister Cathy O'Donnell (who oddly takes top billing). One by one, they and others relate to the police, in flashback, their own recollections of the night of the fire. One big question remains: Whose remains were laid to rest?

Starting off with a great premise - the fantasy of being present at one's own funeral - Bury Me Dead soon finds itself running low on ingenuity. Not completely out, just low. On the plus side, it boasts expectedly fine cinematography courtesy of John Alton, just before he embarked upon his legendary collaboration with director Anthony Mann. But here the director was Bernard Vorhaus, nearing the end of his humdrum career if not of his life, which would last almost half a century after his last movie (he fell victim to the Hollywood blacklist and relocated to England).

In a style inexplicably popular in crime programmers of the late '30s and early '40s, Vorhaus decides to leaven the homicides with laughs. Yet Bury Me Dead manages to pull short of the brink of one of those ghastly slapstick mysteries - not by much, but still short. (As a beef-witted prizefighter, Greg McClure shoulders most of the ungainly comedy on his very broad frame.) With its pleasant but low-voltage cast getting little extra juice from Vorhaus, Bury Me Dead doesn't quite count as forgotten treasure, even by the forgiving standards of nostalgia buffs and film-noir freaks. But it's not a disaster, either, in length and appeal. 3 1/2 stars 5-8-13