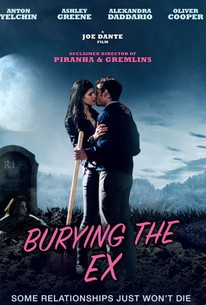 Critics Consensus: Burying the Ex boasts flickers of director Joe Dante's former flair, but neither the concept nor its execution live up to the standard set by his best efforts.

Critics Consensus: Burying the Ex boasts flickers of director Joe Dante's former flair, but neither the concept nor its execution live up to the standard set by his best efforts.

Critic Consensus: Burying the Ex boasts flickers of director Joe Dante's former flair, but neither the concept nor its execution live up to the standard set by his best efforts.

It seemed like a great idea when all-around nice guy Max (ANTON YELCHIN, Star Trek) and his beautiful girlfriend, Evelyn (ASHLEY GREENE, Twilight Saga) moved in together. But when Evelyn turns out to be a controlling, manipulative nightmare, Max knows it's time to call it quits. There's just one problem: he's terrified of breaking up with her. Fate steps in when Evelyn is the victim of a fatal, freak accident, leaving Max single and ready to mingle. Just as Max is thinking about moving on with what could be his dream girl, Olivia (Alexandra Daddario, True Detective) - Evelyn has returned from the grave and is determined to get her boyfriend back...even if that means transforming him into one of the undead. (C) RLJE/Image Entertainment

News & Interviews for Burying the Ex

Insurgent, Far from the Madding Crowd, and More Available on DVD This Week

View All Burying the Ex News

Critic Reviews for Burying the Ex

It's a lot of fun, and Dante's heart is palpably in it.

Even masters have their off days ... and Dante's new picture, "Burying The Ex," seems to have been made over the course of quite a few of them.

Dante has always been at least as much of a comedian as a monster fan, and the film has plenty of gruesome dark humor about embalming fluid and rigor mortis.

The freedom of the director's best work is missing.

"Burying the Ex" is a genre-mashing low for Dante.

How did the guy who made "Gremlins" and "The Howling" direct this cheap-looking, sophomoric, unfunny dreck?

Populated by stock types, the story is backed by little in the way of characterisation, and missing is a necessary campiness to complement the aesthetic.

Even though Burying the Ex shambles through the motions like an actual zombie, it inherently has a good spirit and is trying so desperately to entertain. And that's more than can say about a lot of other horror films...

...one can't help but wonder what drew folks like Yelchin and Dante to such substandard, subpar material.

A modest return-to-form [for Joe Dante].

"Burying the Ex" may not be a breakthrough along the lines of "Gremlins," but it is a cheerily macabre lark and a welcome fresh entry to Dante's oeuvre.

Joe Dante has gifted the world great cinematic treats, such as creature feature Gremlins, sci-fi comedy adventure Innerspace, and the love letter to the cinema, Matinee. Alas, Burying the Ex will not be thought of with such reverence in the future.

Audience Reviews for Burying the Ex

Incredibly lame and lifeless, Burying the Ex is a poorly made horror-comedy from Joe Dante. The love life of a shop keeper named Max gets complicated when his ex-girlfriend rises from the grave several weeks after getting hit and killed by a bus. Starring Anton Yelchin, Ashley Greene, and Alexandra Daddario, the film has a pretty good cast. Their performances however, are rather weak. And the plot is quite perfunctory, endlessly dragging out Max's attempts to breakup with his dead girlfriend. Still, the film has its moments and delivers a few laughs. But overall, Burying the Ex is a lackluster effort by Dante that fails to deliver anything clever or original.

mediocre at best and I expected much more from Dante. He was the master of horror comedies for a long time so I was a little disappointed

More often than not, when I rate a film two or two and a half stars, I'm coming from a place of "Well it's not really for me, but I guess I could see why it might have appeal". Burying the Ex on the other hand comes from a place exactly opposite to that. It's like every five minutes there was something dropped precisely to cater to my interests, but there's no appeal at all. And no amount of goth bars I'd kill to have in my town, horror-themed ice cream parlours, Joe Dante directorial credits or Alexandra Daddario getting her kit off in a graveyard can make up for that. It's not outright boring, which is certainly welcome, but it's horror that's not scary, comedy that's not funny, and bears not one but two life lessons that seem well learned until they're *both* dropped in the final scene. I'm not going to make any "Should have stayed buried" digs, because it's really not *that* bad, but I'm not going to recommend it either.

Maybe I'm being generous because I rented it for free, thanks to a discount from Redbox, but this wasn't a half-bad movie all things considered. Honestly, and this is obviously not true, but the whole film seems like a set-up for one line. I think you know the line and that is 'you are dead to me.' I think, once you know the film's premise, that we can all see this one coming and, you know what, even if you can see it coming a mile away, it's still funny. I just think the film, in spite of its flaws, it's not a consistently funny movie, it looks a little bland, the writing isn't great, has an energy about that definitely makes it better than one would reasonably expect, particularly if you read the critics' reviews. I don't like to read review, not because I don't respect the real critics who do this for the love of films, I just feel that reading reviews, subconsciously, will affect your enjoyment or dislike of a film. Of course, I have a mind of my own and I've enjoyed plenty of films that have been poorly reviewed, but I like to keep that experience as 'pure' as possible. There's a certain tunnel vision when it comes to my viewing films without reading reviews. Anyway, I thought the film was well-cast. It's not like the characters themselves are that complex or have any actual depth to them, it's a fairly simple and straightforward horror/romantic comedy, but I think it's well cast. Ashley Greene is great in her role, she's pretty much insufferable from the get-go, Anton Yelchin is good as is Alexandra Daddario, though the film centers more around Max's and Evelyn's interaction with each other once Eve comes back from the dead. It's a little bit hit and miss, honestly. But, like I said, the film is definitely energetic enough to overcome a lot of this. The cast seemed to be having fun, so that always helps. It'd have been cool if the film sort of reversed the roles, because the crazy ex-girlfriend schtick has pretty much been played out and it'd over some new options, but I can't complain much. With that said, I had some fun watching this movie, it's not good or anything. But it's in line with a lot of Joe Dante's work and I think genre fans will definitely find a lot to appreciate here. If it ever comes on Netflix, then I'd say go ahead and watch it, it's not a must-see though. You won't miss anything clever or fresh if you decide to skip this movie.