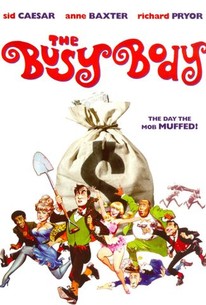 In this Vegas-set crime comedy, a petty crook finds himself pursued by the mob and all entangled in a plot to retrieve a million dollars from another gangster's grave. Comedian Richard Pryor makes his film debut and several established comedians make cameos throughout the story.

Norman Bartold
as Board Member

Mike Wagner
as Board Member

Larry Gelman
as Board Member

Don Brodie
as Board Member

Critic Reviews for The Busy Body

There are no critic reviews yet for The Busy Body. Keep checking Rotten Tomatoes for updates!

Audience Reviews for The Busy Body

When the best thing you can say about a movie is that you didn't hate it that seems to be damning it with faint praise but really this film is so contrived it's hard to say anything else. First the good, Robert Ryan provides his usual touch of class to the proceedings and Anne Baxter, looking stunning with skyscraper hair, is wonderfully droll. Kay Medford is amusing as the overbearing mother even if her part is silly and Arlene Golonka is sweet and kooky. The main story is lame, and the use of obvious dummies for the bodies is just stupid. The real weak link is the star. Sid Caesar proves he was not leading man material with a performance so arch as to be painful to watch. Okay to pass the time with once or if you are a completist for either Ryan or Baxter films but do not go out of your way.

Maybe it was funny once upon a time but it's not so funny anymore.This movie stunk & I fell asleep 10 minutes after watching it

This movie was really hilarious and I really enjoyed it, but it gets kind of boring towards the end. The story is familiar to us today, but I still enjoyed the characters and actors playing them. Richard Pryor has a very funny, but small role. Overall it's pretty good.