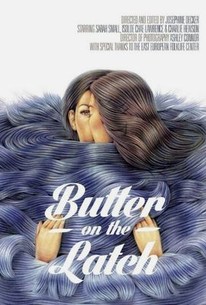 Butter On The Latch Photos

In the dark Californian forest of Mendocino, where a Balkan folk festival is taking place, Sarah and her friend Isolde enjoy learning about the mythical stories, practicing traditional song and dance, and chit-chatting on their torch-lit journeys back to the tiny cottage where they sleep. Sarah encounters a handsome fellow during one of their carefree moments and decides to seduce him. While she makes her advances, she almost forgets about Isolde as she is dragged deeper and deeper into the mythical world being played out in front of her by the other festival guests.

Critic Reviews for Butter On The Latch

"Butter on the Latch" thrives on its casually true snapshots of confusion and connection.

The film's world is beautiful and scary, but also as intimate as a childhood sleepover.

This isn't the easiest kind of work to release into the world, but surely deserves a place in it.

Elegant and elliptical, Josephine Decker's psychodrama is a blurring of the line between waking and dream states.

The film's more overtly observational moments never quite fuse with the more surrealistic passages to convey an organically convincing sense of a mind going on the fritz.

...until the filmmaker can include some kind of adhesive, narrative or otherwise, that can glue her disparate ideas together meaningfully, all that one is left with is evocative images and elusive auras that never truly or satisfyingly add up to much.

One of the pleasures of this intoxicating, at times terrifying 65-minute film is the director's refusal to spell out where she's going and what it all means.

The director, Josephine Decker, seems to be filming in a state of permanent sleeplessness; every image and sound has the impulsive energy of a creation wrenched from a void into which she would leap again joyfully.

Audience Reviews for Butter On The Latch

Josephine Decker is a terribly incompetent filmmaker who clearly has no understanding of the basic function of a camera or how it works, as she exhibits in this empty and insufferable waste of time an awful sense of framing and apparently believes that lack of focus is "artsy."

Butter On The Latch Quotes