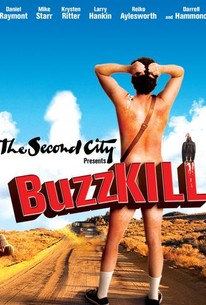 Struggling writer, Ray Wyatt (Daniel Raymont), has had it! His girlfriend (Reiko Aylesworth) wants him to "grow up," his landlord wants him to "pay up" and his girl-toy (Krysten Ritter) wants him to "loosen up." Ray decides instead that he's finished with life. He hits the road when everything changes - Ray becomes famous when a notorious serial killer, named the "Karaoke-Killer" (Darrell Hammond), steals Ray's car and manuscript. As the killer quotes his work, fame & fortune are suddenly at Ray's door-step, but no one can find him when he disappears in this delicious black comedy that's a throwback to the best of the 70's! -- (C) Official Site

It's a bad movie, but worse, it's an abysmal representation of The Second City, an organization I once believed retained such impeccable taste in the realm of humor.

There are no featured audience reviews yet. Click the link below to see what others say about Buzzkill!