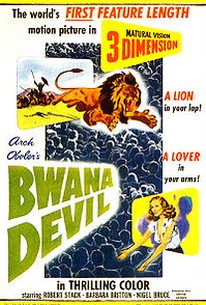 Historically important as one of the first 3-D feature film- the first was the 1922 film Power of Love- Bwana Devil is an otherwise amateurish film, redeemed somewhat by good performances and a reasonably interesting script (by director Arch Oboler). The thinnish story is built around some authentic African footage lensed by Oboler in 1948. Based on fact, the plot concerns two ferocious lions, whose man-eating propensities halted progress on the building of an East African railroad. Robert Stack, Nigel Bruce and Barbara Britton appear in the dramatized sequences, which look like they were filmed for an entirely different movie. The main attraction of Bwana Devil, then and now, is its gimmicky 3-D photography, replete with thrown spears and leaping lions assaulting the camera. Industry reaction to Bwana Devil resulted in the now-famous advertising blurb "What do you want? A good picture, or a lion in your lap?"

Bhupesh Guha
as The Dancer

Milas Clark
as Mukosi
View All

In the case of Oboler's film, the story is, for once, not the most important thing about it. Rather, the manner in which it is presented becomes of prime interest.

Bwana Devil is a grade B type motion picture about the attempt to complete a railroad in Africa against the threat of man eating lions. The lions are the most unferocious and mangy you'll see.

It will be remembered as the first full-length film in 3-D, otherwise deserves to be forgotten.

There are no featured audience reviews yet. Click the link below to see what others say about Bwana Devil!