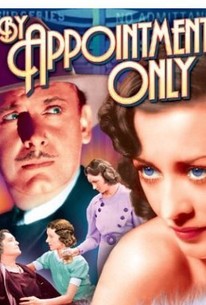 When a patient dies of heart failure, society doctor Michael Travers (Lew Cody), takes an interest in her 14-year-old daughter Judy (Sally O'Neil), whom he makes his ward. Against the wishes of his fiancée, socialite Diane Manners (Aileen Pringle), Michael leaves for an extended business trip to Europe. Upon his return three years later, the good doctor falls desperately in love with his now fetching teenage ward, and is angered by the news that she is engaged to young Dick Manners (Edward Morgan, Diane's brother. When Judy agrees to delay her upcoming wedding, a furious Dick crashes his car. Badly hurt in the accident, Judy is saved on the operation table by Michael, who begs her forgiveness.

Wilson Benge
as Withers
View All

Critic Reviews for By Appointment Only

There are no featured reviews for By Appointment Only at this time.

By Appointment Only Quotes