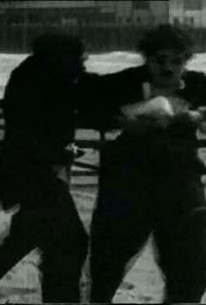 By the Sea (Charlie by the Sea) (Charlie's Day Out) Photos

Charlie Chaplin's last one-reeler (with the exception of The Bond), is an impromptu film shot on the beach at Crystal Pier in Los Angeles, his first film shot there since leaving Keystone. It is superior to similarly made Keystone's in that the timing and gag ideas are much better realized. The film opens with couple Billy Armstrong and Margie Reiger at the beach on a windy day. Margie goes off, telling Billy to stay put. Charlie comes walking down a seaside street eating a banana and, after tossing the peel away, he slips on it. He encounters Billy when both men's hats, attached to them by elastic, get blown off and entangled. This causes a fight between them in which Charlie gets Billy in a headlock and knocks him unconscious, but fleas from Billy's head jump onto Charlie's arms, at which point Charlie performs a precursor of the flea circus routine that is featured in Limelight and the never released The Professor. Just then Edna Purviance passes by and Charlie flirts with her. She is amused by his antics despite herself. She goes off and sits down by her boyfriend, Bud Jamison, who has been waiting for her on a nearby bench. Charlie and Billy make up, and Billy offers to buy them refreshments at a nearby ice cream stand operated by Snub Pollard. They again begin to fight as Billy refuses to pay. During the fight Bud gets hit by flying ice cream and joins the fray. The fight is broken up by a cop, who drags Billy off. Escaping, Charlie sits down next to Edna, bouncing her up and down by sitting down heavily. He's chased off by the returning Bud and joins Margie (who has been looking for Billy) on another bench until all the others arrive, whereupon Charlie tips over the bench and makes his getaway.

Bud Jamison
as Her Husband

Carl Stockdale
as Policeman
View All

There are no critic reviews yet for By the Sea (Charlie by the Sea) (Charlie's Day Out). Keep checking Rotten Tomatoes for updates!

There are no featured audience reviews yet. Click the link below to see what others say about By the Sea (Charlie by the Sea) (Charlie's Day Out)!

By the Sea (Charlie by the Sea) (Charlie's Day Out) Quotes