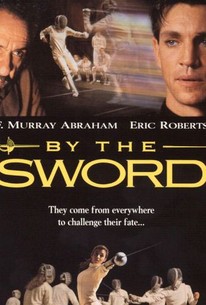 An aged fencing master can no longer bear the guilt of having accidentally killed an opponent during a long-ago match and so goes looking for the dead man's son to find redemption and peace. The son has grown up to run his own fencing school. Without identifying himself, the older man makes friends with the youth. This drama follows what happens when the young man learns the truth about the enigmatic fellow. A climactic duel ensues.

James Diorio
as Fencer
View All

Critic Reviews for By the Sword

By the Sword is about fencing, a sport not often covered in the movies, and it handles it in an interesting way - although the surrounding plot is a little too neat and obvious to really carry the material.

Audience Reviews for By the Sword

Plenty of swordplay fails to sharpen this standard tale of revenge set in the professional world of sword fighting.

By the Sword Quotes