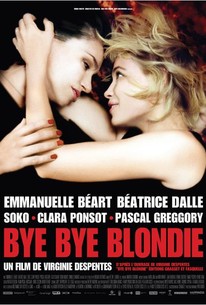 Baise-Moi director Virginie Despentes returns to the helm for this punk-infused drama centering on the turbulent reunion between two disparate women who were once teenage lovers. Adapting her own novel, Despentes tells the tale of Gloria and Frances, who first met when they were both patients in the same psychiatric hospital back in the 1980s, and decided to run away together. At the time their love affair was defined by youthful intensity. Later, when Francis disappeared without a trace, Gloria mourned the loss with a heavy heart. Over 20 years later, Francis (Emmanuelle Béart) and Gloria (Béatrice Dalle) have both turned 40. They've taken very different paths in life, with nomadic Gloria spending most of her time in a Nancy dive bar, and Frances enjoying success as a popular Parisian TV personality. The wife of a closeted and successful novelist, Francis is locked in a mutually-beneficial marriage of convenience when she once again crosses paths with Gloria, and finds her comfortable world turned upside down.

There are no featured reviews for Bye Bye Blondie at this time.