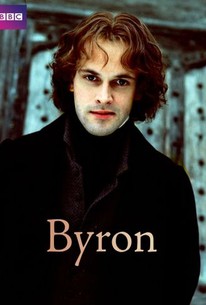 The BBC biopic Byron recreates the life and times of early 19th century scribe Lord George Gordon Byron (Jonny Lee Miller of Trainspotting), widely considered one of the finest English-language belletrists in history. Though Byron culled enormous repute for the scandalous, taboo-breaking lead characters in his novels, the author himself led a life so rebellious that it rivaled anything in his fiction - meanwhile sinking ever quickly into a mire of dissatisfaction and lack of fulfillment as he flittered from one escapade to another. And yet Byron personified the zealous spirit of the Romantic Era, with his unapologetic political radicalism and multiple lovers. Here, director Julian Farino and scriptwriter Nick Dear dramatize Byron's experiences onscreen. Vanessa Redgrave and Natasha Little co-star.

There are no critic reviews yet for Byron. Keep checking Rotten Tomatoes for updates!

There are no featured audience reviews yet. Click the link below to see what others say about Byron!