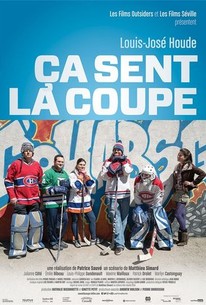 At 35, Max is a prisoner of his past. Since the death of his parents seven years ago, he oscillates between the living room of his small apartment, in which he watches all the matches of the Canadian with his blonde Julie and his friends forever, and the hockey card shop he has Inherited and manages without enthusiasm. But when Julie leaves him suddenly, Max is forced to reevaluate his life. Then begins a long journey, strewn with pitfalls and bad decisions, at the end of which Max will have to mourn his father, stop looking backwards, and finally start looking forward. Between the first game of the Canadiens season and the last one against the Philadelphia Flyers seven months later, Max will have to manage the return of his sister Nathalie, who has been in exile since the death of their parents, as well as the insecurities of her best Friend Phil, who will begin a stormy relationship with Nathalie. Aided by the other guys in the gang, Richard and Francois, Max will have to learn especially from the departure of Julie, in spite of his irrepressible desires to reconquer her. It feels the cup is a dramatic comedy full of sensitivity, in which the dramatic movements are strewn with tenderness and smiles. With the love of hockey as a social setting, it shows not only the powerful transformation of Max, but also that of a whole group of friends, of a whole generation.

I was left with the feeling that it's a hockey movie for people who don't really like hockey.

There are no featured reviews for Ça sent la coupe at this time.