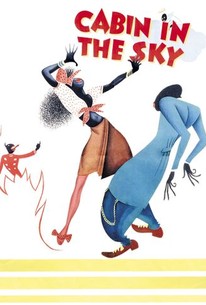 Critics Consensus: Cabin in the Sky's racial stereotypes are impossible to ignore -- but so are its irresistible musical numbers and brilliantly talented cast.

Critics Consensus: Cabin in the Sky's racial stereotypes are impossible to ignore -- but so are its irresistible musical numbers and brilliantly talented cast.

Critic Consensus: Cabin in the Sky's racial stereotypes are impossible to ignore -- but so are its irresistible musical numbers and brilliantly talented cast.

Cabin in the Sky Photos

Mortally shot at a crap game, Eddie "Rochester" Anderson gets a six-month Heavenly reprieve thanks to prayers from wife and True Believer Ethel Waters, but Rex Ingram's "Lucifer Jr." has a secret weapon in the ensuing battle for Anderson's soul: Lena Horne's sultry Sweet Georgia Brown. But Ethel proves to have "everything you've got and whole lot more." Minnelli's first major movie musical features some of the top African American talent of the day, including John Bubbles, Louis Armstrong, and Duke Ellington and His Orchestra. But it's above all a showcase for top-billed Waters' enormous singing, dancing, comedy, and acting talents. -- (C) Film Forum

Louis Armstrong
as The Trumpeter

Oscar Polk
as The Deacon/Flatfoot

Archie Savage
as Dancer
View All

News & Interviews for Cabin in the Sky

View All Cabin in the Sky News

Critic Reviews for Cabin in the Sky

[Cabin in the Sky] is one of the most charming, entertaining and thoroughly enjoyable pictures that Hollywood has sent out in some time.

It is something for you to go out of your way to see and hear.

The chief fault, it seems to us, is the unimaginative direction of Vincente Minnelli who never takes full advantage of the motion picture medium's facilities for creating fantasy... If Minnelli has fumbled his opportunities, Miss Waters has not.

Like many star-filled pictures, this one never really shows off its crowded heavens.

The superb artistry with which [Ethel Waters] is so richly endowed is constantly in evidence, not only in her interpretation of the songs but in the emotional power she displays, as well as the gayer manifestations.

Cabin in the Sky would be worth the price if only to permit observation of Miss Waters' acting skill.

As a whole it is excellent entertainment, and has proven to be a fine vehicle for the talents and versatility of the notable cast.

Ethel Waters has great emotional power not only in her singing of "Happiness Is a Thing Called Joe" and "Taking a Chance On Love," but in every gesture and mood she portrays.

[Cabin in the Sky is] a fantasy that has great moments and other moments which rise little above the routine of the common or garden Hollywood musical.

For sheer entertainment Cabin the Sky is high up on the list of current film attractions.

The Cabin in the Sky is a special for epicures; not wholly satisfying, not, perhaps a well-balanced feast, but of its kind sharp, sweet; and stimulating.

The sum total is definite entertainment.

Audience Reviews for Cabin in the Sky

If you like musicals and stories about heaven and hell, this film will be something to experience.

Cabin in the Sky Quotes