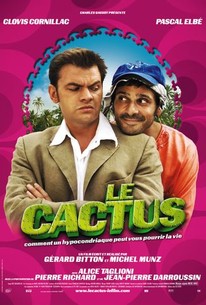 During his adolescent years, Sami, a French teen, saved 15-year-old buddy Patrick from a potentially fatal skiing accident - causing Patrick to feel long indebted to his friend. Years later, Patrick (Clovis Cornillac) has evolved into a congenial husband, father and businessman with a handsome Parisian flat and a gorgeous wife named Justine (Alice Taglioni), but the poor Sami (Pascal Elbe) failed to make an equally smooth transition into adulthood. He developed a severe case of hypochondria - so severe that he's now a basket case and spends inordinate amounts of time in the hospital undergoing every medical test in the books, and presumably torturing his insurance company in the process. So begins Gerard Bitton and Michael Munz's outrageous comedy-of-errors The Cactus. When Sami endures a brain scan and overhears a conversation between a doctor and a nurse, indicating that the patient "is suffering from a severe case of white spots" and "won't last the winter" - his paranoia leads him to conclude that they are discussing the results of his procedure; unbeknownst to him, the discussion pertains to the office cactus. Terrified of impending death, Sami leans more heavily than ever on Patrick and Justine (for whom he carries a serious torch) - first moving into their house, and then carting the Patrick along with him on a trip to India to consult with a famous healer. Alas, the two men's problems are only beginning, and when Patrick's decides to skip work in order to help his friend, it marks the beginning of a journey full of outrageous errors and mishaps that collectively turn each man's life upside down and inside out. ~ Nathan Southern, Rovi

There are no critic reviews yet for Le Cactus (L'Hypercondriaque). Keep checking Rotten Tomatoes for updates!

There are no featured reviews for Le Cactus (L'Hypercondriaque) at this time.