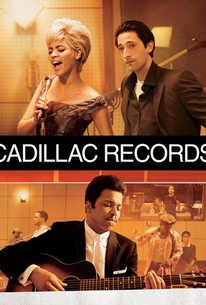 Critics Consensus: What Cadillac Records may lack in originality, it more than makes up for in strong performances and soul-stirring music.

Critics Consensus: What Cadillac Records may lack in originality, it more than makes up for in strong performances and soul-stirring music.

Critic Consensus: What Cadillac Records may lack in originality, it more than makes up for in strong performances and soul-stirring music.

"Cadillac Records" is about the rise and fall of Chess Records, which launched the careers of Muddy Waters, Etta James and Chuck Berry. Leonard Chess scoured the South, checking out the various blues scenes and selling records from the back of his Cadillac.

Cedric the Entertainer
as Willie Dixon

Tony Bentley
as Lomax
View All

The music is good, the suits are sharp, but it's the outstanding performances that wow. Walker is electrifying as Howlin' Wolf and Beyoncé - playing Etta James - has never been so sultry and sexy.

Perhaps there were insurmountable legal restrictions. But the movie still serves as a dandy primer for rediscovering a lot of great music.

Anyone who likes pop music or wonders how bands like the Rolling Stones got rolling will enjoy the ride.

Sadly the movie conforms to all the music-biopic stereotypes we've seen in Walk the Line, Ray and Dreamgirls.

The music is great, so energetic and vital it leaves the drama looking unfocused in comparison. Beyoncé, singing her heart out, is the pick of a very impressive line-up.

Dripping with drink/drugs/infidelity melodrama: it's almost impossible not to make a compelling movie out of this material, but somehow writer/director Darnell Martin manages.

It's got a good beat and you can dance to it. And on this week's Rate-A-Record card, I give [Cadillac Records] a 98.

Darnell Martin takes some dramatic licence with the tale of Chess Records. But it's an enthralling story nonetheless, and the outstanding ensemble cast - together with a primal, heart-thumping blues soundtrack - make it a blast from start to finish.

It turns out to be grittier and more lowdown than that Ray Charles bio.

The movie's major problem is its relatively superficial approach to postwar Chicago, which perhaps accounts for director Martin's playing fast and loose with the historical record.

Cadillac Records is not a terrible movie but in the chain of rags to riches films (Dreamgirls, Ray, Walk the Line, etc.) it definitely falls at the bottom of the heap.

The music, largely performed by the actors, is highly enjoyable.

A white record producer signs African-American musicians, and together the foundations of rock n roll are formed. I suppose the lesson of this biopic is that when one isn't racist in a racist world, one stands to benefit. That is the only discernible advantage that Leonard Chess (Adrien Brody) has over others, yet we don't know enough about Chess or why he is as he is. A commonality among these characters is their penchant for extramarital sex, but Chuck Berry's prison sentence notwithstanding, this behavior doesn't make a plot-driving point or a matter of serious conflict. In the end, Cadillac Records is a music film, with the race relations subplot only tangential, so whether or not you like this film with depend upon whether you like the musical performances by Jeffrey Wright as Muddy Waters, Mos Def as Chuck Berry, and Beyonce Knowles as Etta James. I thought they were good, but I'm not a great judge. Overall, the plot of this film doesn't do a lot - an odd combination of social commentary about 50s race relations and interpersonal affairs - but those of you who like the origins of rock n roll might find the performances, if not the story, compelling.

If you take the ride, you must pay the price. Good but not so great. Cadillac Records is narrated by songwriter Willie Dixon played by Cedric the Entertainer. The film needs a narrator to compensate for the lack of a strong story arc. Nonetheless, Cadillac Records is worth seeing for the music and the recreation of a bygone era. Just don't expect any drama that will knock your socks off! In this tale of sex, violence, race, and rock and roll in 1950s Chicago, "Cadillac Records" follows the exciting but turbulent lives of some of America's musical legends, including Muddy Waters, Leonard Chess, Little Walter, Howlin' Wolf, Etta James and Chuck Berry.

This is a thoroughly enjoyable, though heavy fictionalized film about the story of Leonard Chess and Chess Records- the legendary and influential man and label responsible for creating the "electric" blues scene in Chicago from the early 1940s-late 1960s. It's a story that definitely is worthy of being told cinematically. As it turns out, this film isn't the only one to tackle this subject, though I am unfamiliar with the other versions. All in all, this is a pretty decent film, and, as I opened this review with, it is quite entertaining. It's not a musicla per se, but musical performances do make up a good chunk of the running time. Besides providing the story for Leonard, his label, and some of the people who recorded for him (and what a lineup it was!), the film does also give insight into the racial tensions of the era and the legacy of the blues, R&B, and soul. Even though it addresses these things, I could have used a stronger analysis and more depth here, as well as a more accurate portrayal of the characters and the history, but that's just the nitpicking historian in me. There is a fair issues for me with this film, and that is, even though the film has a good story, the script isn't really all that original or great, and the direction, though okay, isn't really all that distinct or remarkable. Thankfully though, things are saved (and pretty much carried) by the great casting and the wonderful performances by said cast, and the excellent music and musical performances. Here's the lineup to prove my point: Adrien Brody as Leonard Chess, Jeffrey Wright as Muddy Waters, Beyonce Knowles as Etta James, Columbus Short as Little Walter, Mos Def as Chuck Berry, Cedric the Entertainer as Willie Dixon, and Eamonn Walker as Howlin' Wolf, and that's just for starters. As great as these people are, and as much as I loved their work (especially Brody, Wright, Knowles, and Def) I also really loved Norman Reedus in a supporting role as the engineer at the studio. It's not a big or really significant role, but he does a good job, and I think he's just in general a solid actor who deserves more work. All in all, this could have been a better work, but it's a decent enough overview and introduction to a great moment in music history, despite the flaws. If you happen to like anyone in the cast, dig the blues, or want to know more about any of this stuff, then give this one a watch.

According to my friends who know a lot about the Delta Blues, Chess Records and Chicago, this is a very accurate historical film. That it's narrated by Willie Dixon (Cedric the Entertainer) and features Mos Def as a striking Chuck Berry helps, Beyonce got her hands - voice - on some Etta James standards, and Eamonn Walker was no less than fantastic as Howlin' Wolf. And yet, I wasn't all that satisfied with this film. I can't really explain it. I think Adrien Brody was a little flat, and on the whole the film lands on the cheesy side. I think it was just too glossy to be believed - despite its being true. A good film, not as great as it might have been though.