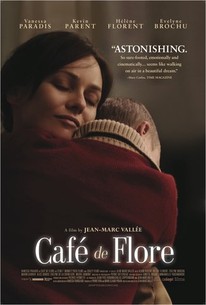 Cafe de Flore is a love story about people separated by time and place but connected in profound and mysterious ways. Atmospheric, fantastical, tragic and hopeful, the film chronicles the parallel fates of Jacqueline, a young mother with a disabled son in 1960s Paris, and Antoine, a recently divorced, successful DJ in present day Montreal. What binds the two stories together is love - euphoric, obsessive, tragic, youthful, timeless love. -- (C) Official Site

It's terribly long and repetitive for so delicately dreamy a diptych, and at times the modern-day story feels like little more than a drawn-out apologia for the wandering male gaze.

Goes from intriguing to irritating.

Feels less like a movie than like a cinematic jigsaw puzzle whose agitation undermines the very continuity it wants to portray.

This mushy, mystical French-Canadian melodrama tries to make parallel a pair of love stories: one between preteens with Down syndrome in 1969 Paris, and the second between a Quebecois DJ and his new amour some 40 years later.

...be rewarded with a wonderfully involving tale that tries to capture how emotions and love often seem to transcend the individuals beholden to them.

The film's central performances are all terrific. Florent perfectly captures Carole's anguish which is, at times, almost unbearable to watch.

You may not ultimately agree with Valée's big spiritual pay off (it may be interpreted as a mere excuse for a middle-aged man to have an affair) but it's undeniably gripping, creative, and brash cinema.

Café de Flore very much floored me and its enigmatic charm continued to weasel its way into my mind long after it was over.

An intriguingly unconventional drama that revels in dreamy interludes, stream-of-consciousness montages and weighty drama - but that never lives up to its stylistic promise.

The two types of love that it presents are not comparable and the consequences of Jacqueline's obsession are just ludicrous, but this is a mysteriously charming film about how things change in our lives - and that wonderful song Café de Flore will probably stick in your head.

"Cafe de Flore" is an endearing and thought provoking movie that wonders if some things are always meant to be. Jumping back and forth skillfully between two different storylines, including one that is unstuck in time, the movie does a good job of connecting the dots in a figurative sense. But when it comes to literally doing so, it could be said to resolve events too neatly for such complicated emotions. In a straightforward narrative set in 1960's Paris, Jacqueline(Vanessa Paradis) is left to being a single mother after she refuses to give up her newborn son Laurent(Marin Gerrier) with Down Syndrome and her husband lacks the balls to stand by her. So, she becomes his advocate and knight in shining armor, doing research on not only extending his life, but also giving him a better quality of life by mainstreaming him at school. At first, Antoine(Kevin Parent), a popular club DJ, and Rose(Evelyne Brochu) seem to be living the perfect life with their daughters in present day Montreal. As one could tell by their still rambunctious sex life and confirmed later, Rose and Antoine have not been together for long. In high school, Antoine met Carole(Helene Florent), sharing a mutual love for music and falling deeply in love with each other. So, it should not come as a surprise that Carole is bitter over the breakup, even as she shares custody of the girls, and suffers from sleepwalking and a questionable taste in books. At the same time, Antoine is a recovering addict, not only having to deal with his own demons, but those he inherited from his father(Michel Dumont), himself an alcoholic.

'Cafe de Flore'. Love, its dizzying highs and lows, and everything else in between, in this brave, stunning, deeply affecting film. I am still reeling from this thing, three hours later. What starts as two seemingly separate, simple stories about love, takes a very dark, spiritual turn, and in the process, explores "love" in its many forms. I say two simple stories in relation to where the story goes, but they aren't simple by any means. It almost feels wrong to call the raw, incredible compassion shown by Jacqueline to her Down Syndrome son, Laurent "acting". Vanessa Paradis is outstanding as a mother who has given all her love and devoted her life to her son, expecting nothing less than the same in return. The introduction of Vero, and Laurent's "I love her like I love you" sets things unravelling. The present day story is equally compelling, and thematically parallel in its telling of Carole, a woman like Jacqueline, who has only ever loved one person, but loses him to another, and cannot move on. They both still reminisce, and the way this whole film is edited, switching effortlessly between tones, stories and timeframes, is rather brilliant! Joyful, motherly love to a lost teen romance to the increasingly dark visions of Carole, that consistently unsettled me. In the short time I've had to process this, I've thought about the ending in a couple of different ways. I didn't know what to make of it at first, then felt the film would have worked just fine without connecting of the two storylines from a narrative perspective, bar Carole's visions. Then I thought about it again, and what Carole's "sorry" to Antoine meant. This is a Carole that has come to terms with the connection, and what she did as Jacqueline to Laurent and Vero. This Carole has finally let go, understanding that love is sadly not 1:1. I'd be amiss not to mention the soundtrack. It's probably my favourite of the year to date. The characters, especially Laurent, and his reincarnate, Antoine, are linked via the track 'Cafe de Flore'. Music means a lot to these two, translating naturally to the importance the soundtrack has to the audience. The experience of being challenged by cinema is one I thoroughly enjoy. This is not easy going, but it's damn rewarding.

Jean-Marc Vallee is one of Canada's most daring and best filmmakers. In fact, Canada's best films tend to come from Quebec - Incendies, The Barbarian Invasions, Polytechnique, and C.R.A.Z.Y to name a few. And up to a certain point, I was ready to add Vallee's newest film, Cafe de Flore to that list. Unfortunately, somewhere around the film's third act, the film just lost me. A very ambitious picture about very complicated people with a great soundtrack to boot, everything that it had going for it fell apart from a lack of direction, or simply a mash-up of strange, existential ideas that all of a sudden get thrown into the story at random. Following a very discontinuous editing pattern, the narrative follows two parallel stories - one in present day Montreal about a club DJ who has just divorced his high school sweetheart (and mother of his two children), and is now remarrying, the other in 1960s Paris about a mother with a Down syndrome child who struggles to provide that child with the most "normal" upbringing she can manage. The film balances these stories very well, and links them through the film's title, which refers to a song that both main characters love. Traces of Wong Kar Wai's Chungking Express are evident, and the beautifully composed shots juxtaposed with a lounge induced soundtrack make for what is almost a perfect art-house experience. Yet all of a sudden the third act delves into a David Lynch horror picture, bringing up themes of reincarnation, a contrived drug relapse for characters you didn't even know were addicts in the first place (one was an alcoholic, but the drug part comes out of nowhere), the Parisian mother ends up tying her son to a bed to keep him from seeking out the girl he loves, sleepwalking, an annoyingly cliche dream sequence, and a ending that toots some magical clue to unlocking the picture. It just screams pretentious and shocking for the sake of being shocking. This third act completely undermines the film's touching and intriguing previous two thirds. Some people may love this film for its jarring and strange twists. I just kept asking myself, "where is Vallee going with this?" And wherever the hell we ended up, I just didn't care.