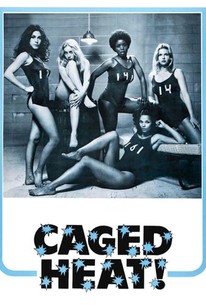 Considered the quintessential "girls in prison" flick of the 1970s, novice director Jonathan Demme's Caged Heat is set in a hellish American woman's penitentiary run by vicious, wheelchair-bound Barbara Steele. Statuesque convict Erica Gavin is forced to undergo horrible (but legal) tortures when she is falsely accused of trying to escape. Gavin and fellow con Juanita Brown decide to make a real break, but return to prison to rescue a friend who is about to be lobotomized by the sadistic prison doctor. Then they stage a robbery, only to find a group of male robbers at the bank ahead of them. A final shootout in the prison yards brings the film to a bloody climax. Caged Heat was also released under the title Renegade Girls.

Gary Littlejohn
as Cop at Bank

Keisha
as unknown
View All

Jonathan Demme's debut film is campy, choppy, and generally immature, though his bonding themes are fitfully discernible amid the cartoonish action.

It's no more than passable as a thriller, but the density of invention and energy in other respects is enough to shame a dozen contemporary major studio movies.

To watch Caged Heat is to be weirdly inspired - from garbage can eventually come greatness.

There's ultimately never a point at which Caged Heat is able to overcome its palpably minuscule budget...

Caged Heat is a film about prison interspersed with a good dose of feminism, terror, and humor. [Full Review in Spanish]

...an exploitation film of the women's prison variety that doesn't take itself too seriously.

Contains a skits-within-the-movie sequence that comments on the narrative while also exposing the artificiality, absudity and performance aspect of the 'Women in Prison' trend itself.

An exciting film, and one that proves that even the most exploitative of films can make a relevant statement.

The director's peppery edge and humour lift this above the normal drive-in fare and Steele adds punch.

an odd but compelling mish-mash of breast parade and hokey action . . . with dark and visceral imagery that lends "Caged Heat" more street cred than it would normally deserve.

Your eyes do not deceive you - that is THE Jonathan Demme with the director's credit for this Roger Corman exploitation and one of the most influential of the WIP (women in prison) subgenre. And you know what, it ain't half bad! Don't get me wrong, nobody would mistake this for high quality cinema, but what it does it does well. Lead actress Erica Gavin as the new jailbait is plain and frankly rather boring, but thankfully the supporting characters have a lot of life like cutie Roberta Collins who steals food out of the employee break room to feed those in solitary and Juanita Brown as the fiery & foul-mouthed ruler of the cell block. Barbara Steele is really great as the wheelchair-bound superintendent McQueen who lives a repressed lifestyle and feels torn between her genuine desire to rehabilitate her charges and punish them for insubordination which she takes as a personal affront. There are four, count 'em, FOUR shower scenes mixed in among the catfights, corrective discipline, and rebellions leading up to the big showdown. Dust off your 8-track and pull out your polyester and bell-bottoms!