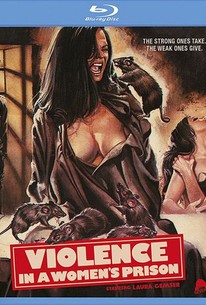 Laura Gemser returns as Emanuelle Sterman/Laura Kendall in this rather extreme Italian-French women's prison film from Bruno Mattei (credited on some prints as "Vincent Dawn" and others as "Gilbert Roussel"). Emanuelle is sent to Santa Catarina Women's Penitentiary for drugs and prostitution, meeting the usual sadistic warden (Lorraine De Selle from Cannibal Ferox), lesbian inmates, and hookers with hearts of gold. Emanuelle is actually an undercover reporter for Amnesty International, and when this fact comes to light, she is tortured even worse. Mattei doesn't skimp on the nastiness, presenting a three-way catfight on a floor full of feces, Gemser nibbled by rats in solitary confinement, a homosexual who is sodomized to death after his straight cellmates are aroused by a striptease, and various rapes, tortures, and vomit scenes. Gabriele Tinti is the concerned doctor, who eventually gets a celebratory roll in the bushes with Emanuelle during the escape scene. Claudio Fragasso (Monster Dog) was the assistant director.

There are no critic reviews yet for Caged Women. Keep checking Rotten Tomatoes for updates!

There are no featured reviews for Caged Women at this time.