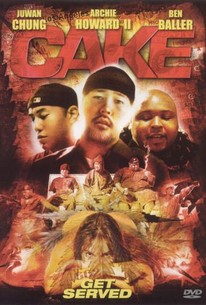 When a trio of small-time marijuana dealers incur the wrath of the Mexican mafia, their American dream turns into a terrifying nightmare in the debut feature from director Juwan Chung. Everything seems to be going well for life-long friends-turned-petty pot peddlers Kash (Archie Howard II), Shane (Chung), and Bones (Ben Baller) until their trusted drive is busted during a routine run to Ohio, and when the naïve dealers try to recoup their losses by selling cocaine, they quickly realize that they've gotten in over their heads. With no one to trust and the Mexican mafia hot on their trail, Kash is soon thrown in jail and Shane and Bones left to fend for themselves as the hired guns close in. When survival instinct pits friend against friend, loyalties are tested and bonds broken for three friends who thought they had it all.

Doc Newman
as Plan B

Emilio Rivera
as Fidel
View All

Cake is under-baked and underwhelming.

Cake's moments of charm and the cast's good cheer compensate for the thinness of the material.

As the saying goes, don't judge a book by its cover. In this case, don't let the star names fool you.

There are several laugh-out-loud moments in the adult romantic comedy Cake, a film with the magical ability to -- poof! -- leave your head the second it leaves the screen.

There are no featured audience reviews yet. Click the link below to see what others say about Cake!