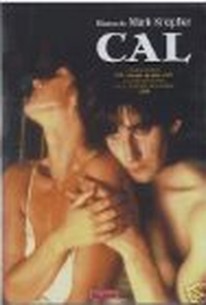 In the opening scenes of this politically-oriented drama, a killer enters the home of a policeman and in a shocking sequence murders him in cold blood -- an act that becomes the key to the rest of this film about the conflict between politics and life. Young Catholic, Cal (John Lynch) works in a slaughterhouse during the day and has participated in terrorist activities, but he wants out after he has been forced to drive a getaway car in the murder of the policeman. Meanwhile, he is slowly enchanted by Marcella, an older woman (Helen Mirren) who has just started working at the local library. Smitten but shy, Cal manages to ease himself into a job on her land, and when his father's home is burned to the ground by Protestants, Cal moves into a cottage on the woman's estate. Eventually, the two start a quiet liaison -- but Cal's inner turmoil disturbs the happiness he feels when he is with Marcella. Can he continue to hide his terrorist past from Marcella, who knows nothing about what he has done? While this question and others raised by the film are reasonable, director Pat O'Connor's treatment of the story may be too muted, and John Lynch's Cal too innocuous and frail (especially in contrast to Helen Mirren's Marcella) to win over all viewers. ~ Eleanor Mannikka, Rovi

Scott Frederick
as Soldier at Farm

Gerard O'Hagan
as Soldier at Farm
View All

The symbolism is thrashed just a little hard at times, but on the whole it's a most impressive debut from O'Connor, strongly acted all round.

Cal tells a story that has been told many times before, but tells it quietly and powerfully about a particular time and place: Northern Ireland in the 1980s.

Miss Mirren, through a reserve that disappears layer by layer, makes Marcella a woman of unexpected substance and generosity, one who is no more comfortable with the pain and paradoxes of Northern Ireland than Cal is himself.

[A] trite, weepy, rather contrived tale -- you feel that every extra who passes in the street has a more involving, authentic story to tell.

Has its powerful moments.

A taut, compelling film about the tension, distrust and senseless violence in contemporary Ireland.

There are no featured reviews for Cal at this time.