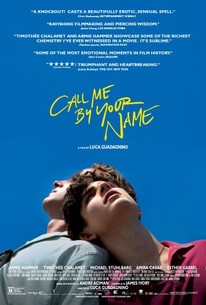 Call Me by Your Name Photos

CALL ME BY YOUR NAME, the new film by Luca Guadagnino, is a sensual and transcendent tale of first love, based on the acclaimed novel by André Aciman. It's the summer of 1983 in the north of Italy, and Elio Perlman (Timothée Chalamet), a precocious 17- year-old American-Italian, spends his days in his family's 17th century villa transcribing and playing classical music, reading, and flirting with his friend Marzia (Esther Garrel). Elio enjoys a close relationship with his father (Michael Stuhlbarg), an eminent professor specializing in Greco-Roman culture, and his mother Annella (Amira Casar), a translator, who favor him with the fruits of high culture in a setting that overflows with natural delights. While Elio's sophistication and intellectual gifts suggest he is already a fully-fledged adult, there is much that yet remains innocent and unformed about him, particularly about matters of the heart. One day, Oliver (Armie Hammer), a charming American scholar working on his doctorate, arrives as the annual summer intern tasked with helping Elio's father. Amid the sun-drenched splendor of the setting, Elio and Oliver discover the heady beauty of awakening desire over the course of a summer that will alter their lives forever.

News & Interviews for Call Me by Your Name

View All Call Me by Your Name News

Critic Reviews for Call Me by Your Name

A modern-day Visconti, Italian director Luca Guadagnino (I Am Love) grants us entry into a world not only of wealth but of culture, which can be just as liberating.

Call Me By Your Name survives because of poignant screenwriting, keen directing, and tender acting.

The characters' beauty and intellectual perfection is so consummate that I couldn't entirely believe that these people actually had genitals-that they could ever sweat or incur sunburn.

This is a beautiful film -- one that is startlingly real. It feels so blisteringly sensual and in the moment, that it's almost impossible to ignore.

"Call Me By Your Name" can be considered an idealistic film, but that's only natural for something about young people experiencing something wonderful for the first time.

This coming-of-age love story is all texture, tone and nuance...Luca Guadagnino has made a lovely cinematic feather. And it floats down beautifully, riding a soft breeze of melancholy and grace.

While it's the simmering sexual tension that keeps you watching for most of the film, it's only later that you realise this is a character piece about a man's bluster and how his confidence does not make him strong.

The most humane and kind movie in a year that featured so many others filled with anxiety and darkness.

Chalamet's performance is magnificent - this is the sort of performance that stretches across a lifetime. This is "Hey look we have our own James Dean now" level good stuff here

The blossoming romance between these two men, that unfurls over six sun-dappled weeks in northern Italy, is utterly ravishing.

What the film does with that, thanks to the performance by 2017 all-star Michael Stuhlbarg, is surprising and life-affirming.

Chalamet is quickly becoming one of the most reliable young actors around...

Audience Reviews for Call Me by Your Name

I am not sure why I enjoyed this film as much as I did. It doesn't communicate primarily through dialogue, the story is choppy, its heavy with the metaphors, and there are many scenes that seem to serve little to no purpose. However, the way the characters convey emotions and communicate without saying a word is amazing, the aura of escapism is wonderfully portrayed by using beautiful shots and the soothing sounds of Sufjan Stevens, yet not overdone like some fairytale. If this story were put in a vacuum it wouldn't interest me, but it makes you feel a certain way and takes you to a place that is pretty enjoyable.

"Call Me By Your Name" is extraordinarily beautiful cinematically, technically and artistically. All performances are exceptional. With a poignant story of the disappointment and exhilaration springing from the uncertainty of any young love, the story and characters never debase their validity with invocations of fear (or worse, shame!) as is almost universally portrayed in films based upon same-sex relationships in the 1980s. "Call Me By Your Name" is elevated above the typical coming-of-age romance story because it transcends the tropes with grace and dignity without short-changing the emotional roller-coaster of first-discovered passion. I strongly recommend this film to anyone who has been traveled down Love's pot-holed and crooked path yet has emerged a mile down the road the better for it, despite the tolls levied.

Call Me By Your Name is a slower peak into the discovery of romantic feelings between 17-year-old Elio (Timothee Chalamet) and grad student Oliver (Armie Hammer). Set amid the sunny countryside of northern Italy, the film takes it sweet time establishing the lazy world of its characters and their closely intersecting orbits. I became anxious because the characters kept me at arm's length, leaving their burgeoning romance to feel distant and tame. I understand the hesitation of both parties and the age difference complicating matters. I understand caution. But it feels like the film is cautious to a fault, to the point that one of them laments later why they wasted so much time. The acting is pleasant if undistinguished. The best scene is a terrific monologue by Michael Stuhlbarg as the world's most lovably accepting father. For an earth-shattering romance, I too often felt unmoved and restless. If we're going to spend this much time hanging out with these people we should get to know them more intimately, and not just in the physical sense. I missed the compelling artistic charge of something like a Moonlight. I'm a bit stupefied at all the praise heaped upon Call Me By Your Name, a fine indie drama that, for me, too infrequently delves below its pretty surface into something more substantial. Nate's Grade: B-

Not to single out this particular premise, but films revolving around gay couples have been terrific over the last decade or so. There was a spark when 2005's Brokeback Mountain was released, which eventually brought us to foreign films like Blue Is the Warmest Colour being nominated for a Golden Globe or Moonlight winning best picture at the Oscars. Call Me by Your Name is the latest film to probably receive many nominations in the coming months, and believe me, the praise is not false. Being a fan of 2015's A Bigger Splash, I was looking forward to Luca Guadagnino's follow-up feature film, and I believe this to be an improvement in the best ways. Exploring the hardships of life and what it means to just kick back and relax every now and then, Call Me by Your Name is a film that's been sticking with me since my viewing of it. While it admittedly won't be able to draw in everyone to the theatres, here is why I believe this to be a fantastic, award-worthy picture. Written by James Ivory and directed by Luca Guadagnino, Call Me by Your Name follows a family that lets Oliver, an older graduate student, live in their home for the summer. While this is a common thing, what's not too common is that Elio, their son, will eventually grow romantic feelings toward this man, convincing him to become his lover for the summer. From the age gap between them and having to hide it from the family, their situation isn't an easy one, nor will it be for some audience members, but it really is a wonderful story. This is easily a story that could've stirred up controversy if it hadn't been done with taste, and because of how it was made, I just couldn't take my eyes off the screen. This was made entirely possible by the incredibly devoted performances by Timothée Chalamet and Armie Hammer. Hammer has had his ups and downs through the years, appearing in Oscar-winning films as well as some of the worst films of the year, so his performance here was the most shocking to me. Yes, he's been talent in nearly everything he's been in, but he really gave his all in this performance and I honestly don't think he'll ever be better than he was in Call Me by Your Name. On the other hand, young Chalamet has a very bright future ahead of him. Being a relatively new actor, his chemistry with Hammer was impeccably astounding. Their relationship took a while to grow on me, but once it completely won me over, I found myself wondering if there was anything to really complain about. If I had to complain about anything, it would be in its extreme pressure to try your patience. There are very long sequences of silence, making you relax and take in either a romantic moment or the scenery around them, which I also found poetic at the same time, so I actually have trouble coming up with issues, but I have to admit that I did find the movie slow at times. Yes, it's meant to be slow, which is why that complaint isn't exactly valid, but I just have to be honest. In the end, this is a truly remarkable piece of dramatic filmmaking and there are some very memorable scenes that keep replaying themselves in my head. One scene in particular that involves Elio and his father Mr. Perlman (played magnificently by Michael Stuhlbarg) toward the end had me in tears. From the brilliantly written screenplay, to the poetic cinematography, to the terrifically calm direction, Call Me by Your Name isn't a movie that I would send the average moviegoer out to see, but if you're a hardcore film fan, I think you'll end up loving this movie.

Call Me by Your Name Quotes