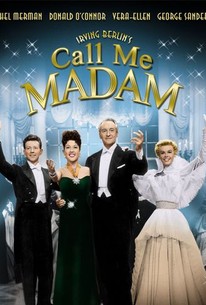 Ethel Merman reprised her role as a socialite turned diplomat in this screen adaptation of Irving Berlin's hit Broadway musical. Sally Adams (Merman) has made it her business to know everyone worth knowing in Washington D.C., and her penchant for parties pays off when she's appointed United States Ambassador to Lichtenburg. Once she is installed in her new position, she falls in love with suave Foreign Minister Cosmo Constantine (George Sanders), while Princess Maria (Vera-Ellen) has her head turned by Sally's press attaché, Kenneth (Donand O'Connor). Call Me Madam is a showcase for Merman's roof-raising musical comedy style, and here she gets to sing a handful of Berlin tunes, including "You're Just In Love," "Can You Use Any Money Today?" and "Hostess With The Mostes' on the Ball." Vera-Ellen's singing was dubbed by Carol Richards.

Critic Reviews for Call Me Madam

The great Ethel Merman recreated her Broadway role in this Irving Berlin musical, which won an Oscar for scoring.

Isn't a whole lot more than a solid film version of Irving Berlin's Ethel Merman stage show. But it doesn't really need to be.

undiluted Merman at her "mostes."

There are only three reasons to see this one, a rare Ethel Merman starring role, song and dance numbers by film legend Donald O'Connor and politically savvy dialogue.

Audience Reviews for Call Me Madam

It's ridiculous, but that's part of the fun. The musical numbers are great.

Ethel's big show. A surprise to see George Sanders singing so well and Wera-Ellen is always a welcome addition to any film but this one goes on a little too long. Still big brassy entertainment, could it be anything else with the Merm front and center.