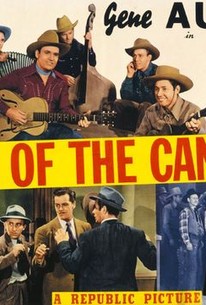 Call of the Canyon Photos

Cattleman Gene Autry is put out-to say the least-when he finds out that he's been slickered by crooked purchasing agent Thomas McCoy (Edmund MacDonald). It turns out that McCoy is in debt to bookies, and has been skimming his customers to pay off his gambling losses. Autry hopes to put a stop to all this by going directly to McCoy's boss, Grantley B. Johnson (Thurston Hall), but the Big Guy's office is crammed full of radio agents who hope to persuade Johnson to sponsor their programs. One of these agents is a young lady named Kit Carson (Ruth Terry), whose sample record disc is accidentally broken in the crush. Thus is the main plot briefly put on the back burner as Kit persuades Gene and his ranch-hand pals (the Sons of the Pioneers) to pose as radio crooners to impress Mr. Johnson. Eventually, Call of the Canyon gets back on track with an exciting runaway-buggy climax, but for the most part the film is more musical than western.

Thurston Hall
as Grantley B. Johnson

John Harmon
as The Pigeon

Critic Reviews for Call of the Canyon

Call of the Canyon is one of those movies you can watch on a lazy weekend afternoon and get instant smiles.

Audience Reviews for Call of the Canyon

There are no featured audience reviews yet. Click the link below to see what others say about Call of the Canyon!

Call of the Canyon Quotes