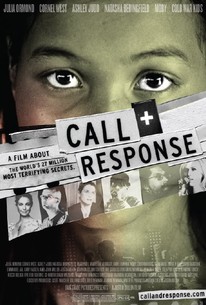 "Call + Response" is a first of its kind feature documentary film that reveals the world's 27 million dirtiest secrets: there are more slaves today than ever before in human history. "Call + Response" goes deep undercover where slavery is thriving from the child brothels of Cambodia to the slave brick kilns of rural India to reveal that in 2007, Slave Traders made more money than Google, Nike and Starbucks combined. Luminaries on the issue such as Cornel West, Madeleine Albright, Daryl Hannah, Julia Ormond, Ashley Judd, Nicholas Kristof, and many other prominent political and cultural figures offer first hand account of this 21st century trade. Performances from Grammy-winning and critically acclaimed artists including Moby, Natasha Bedingfield, Cold War Kids, Matisyahu, Imogen Heap, Talib Kweli, Five For Fighting, Switchfoot, members of Nickel Creek and Tom Petty's Heartbreakers, Rocco Deluca move this chilling information into inspiration for stopping it.

How much impact Call + Response will have is anyone's guess. But when you see a 4-year-old sex slave, ignoring this crisis is no longer an option.

All in all, Call + Response makes alarmingly clear how ugly, pervasive and out-in-the-open the trade in humans for sex or labor often is, from the expected places -- Eastern Europe, Southeast Asia -- to our own backyard.

It's a documentary with its heart and its outrage in the right place.

Laced with the potent music of a dozen bands and solo artists, Call Response is an urgent call to arms in the war against modern slavery.

The piece is well-executed, and compiles some strong takes from folks that are calling out modern-day slavery and are determined to topple its infrastructure.

Commendable if not compelling.

There are no featured audience reviews yet. Click the link below to see what others say about Call + Response!