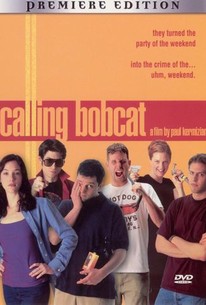 Three guys looking for love and a fresh start instead end up spending an evening making one big mistake after another in this independent comedy. Darrin (Jayce Bartok) is a well-meaning but chronically unambitious guy in his early twenties who hasn't figured out what he wants to do with his life. Darrin's girlfriend is tired of waiting for him to do something with himself, and she gives him his walking papers. Needless to say, this leaves Darrin extremely depressed, and one night Darrin and his best friends, Dan (Daniel Serafini-Sauli) and Lawson (Rob King), hit the town, hoping to find Darrin's ex and persuade her to give him another chance. When they do find her, they discover that she's wasted no time finding a new boyfriend and the guys decide that some serious drinking is in order. Before long, Darrin and his buddies have decided to move to Florida to start their own business, but along the way they encounter a number of strange detours, including drinking a lot of olive oil, robbing a liquor store for a sandwich, breaking into a warehouse stocked with potato chips, and encountering a flock of inappropriately friendly sheep. The title Calling Bobcat, by the way, refers to the comic actor Bob Goldthwait, whose work for some reason is a recurring theme in the guys' conversations.

Eric Dubowsky
as Jerry
View All

The most impressive thing about this unoriginal, amateurish, and entirely unfunny movie is that the producers somehow talked people into paying for its creation.

There are no featured audience reviews yet. Click the link below to see what others say about Calling Bobcat!