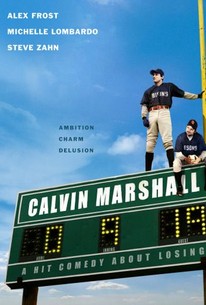 An unathletic junior college student works to realize his dream of playing for the MLB while courting a pretty volleyball player who displays the athletic prowess that he so sorely lacks. Calvin Marshall (Alex Frost) is a good kid with big dreams. Despite knowing that the young player will never make it to the big leagues, his coach, Doug (Steve Zahn), recognizes Calvin's dedication to the game, and decides to keep him around as a morale-boosting bench warmer. Meanwhile, likeable Calvin strikes up a tentative romance with Tori (Michelle Lombardo), a statuesque volleyball star with a quick smile and a warm heart. But just as Calvin and Tori are getting to know one another, the bumbling baseball player tells an innocent lie that threatens to destroy any chance for a meaningful relationship. Despite the many setbacks Calvin faces both romantically and professionally, he struggles with the realization that his only hope for getting the absolute most out of life is to accept the little disappointments along the way, and turn his failures into learning opportunities.

Tia Khachitphet
as Girl with Glasses

Grayson Wagner
as Kid with Football
View All

Good-natured but not overly sentimental, Calvin Marshall makes its formula work with thoroughly realized characters and unforced comic moments about the irrepressible charms of the obliviously self-deluded.

Most baseball movies are about dreams; Calvin Marshall is a sentimental comedy about self-delusion, and the young actor Alex Frost can't find a way to make sense of Calvin, or to make him sympathetic.

Aside from Zahn, thesping is uneven.

When you don't care about the character who gives a movie its name, you've got terminal problems.

A baseball movie suffused with authentic patter and love for the game equal to that harbored by its titular character.

A grand-slam comic drama that's heartwarming, funny, inspirational and, above all, triumphant.

A rare and invigorating spotlight on the back to basics collective spirit among salt of the earth workingclass enthusiasts of any game played among them, simply for the love of sports beyond money and fame. And just the way it was always meant to be.

[Director] Lundgren has a light touch and a weakness for wistful indie lullabies; it is the former that gives this classic coming-of-age film its distinctive ring.

I put this movie off for a long time, because it was supposed to suck. Well, it didn't. Not at all. This was a rather enjoyable, rather well done little movie. Alex Frost (Calvin) reminded me ALOT of a young John Cusack. Nice movie...

"Ambition Charm Delusion" Calvin Marshall is the name of the movie and of the lead character. Calvin has high hopes of being a baseball superstar, but he can't even play for a little Junior College team. The coach let's him hang around though because he doesn't have the heart to tell Calvin that he just doesn't have any talent.  This is by no means a great movie. It's an average one at best, but it has a lot of likable qualities. First, all of the characters are likable. Calvin is a hard working and nice kid who loves baseball. The girl he likes Tori is a beautiful, charming, and nice star volleyball player, who is going through a tough time. Coach Little, played really well by Steve Zahn, is a hard ass on the field with his players and a drunk off the field. But we see what he's really like when he talks to Calvin. He may not admit it, but he likes having Calvin around. Overall I enjoyed watching Calvin Marshall. It's not a movie that you feel the need to see more than once. It doesn't have a star-studded cast. It's not a big budget comedy with tons of laughs. It's just a charming little Indie Drama/Comedy that has a heart and is easy to like. If you need to kill an hour and a half, it's not too bad. If you never see it, well, that wouldn't be to big a deal.

A hit comedy about losing Great movie, I really enjoyed it. It was a smart but funny movie with a nice message. The film Calvin Marshall transcended your typical sports film to convey the choices we all face in life when it comes to following our dreams, our talents, and what is important in our life. It's not a fairytale story, or the story of the kid from the wrong side of the tracks overcoming seemingly insurmountable odds, or the story of the washed up veteran making an improbable comeback, this is the story of everyman. Steve Zahn absolutely nailed his character and put up one of his best performances, if not the best performance, of his career. I love sport movies! Calvin Marshall's childhood dream of playing Major League Baseball is in serious jeopardy as he can't seem to make the Bayford Bisons Junior College team. A poignant comedy about Calvin's deferred dream and the people in his life who want him to succeed.

Cast: Alex Frost, Steve Zahn, Jeremy Sumpter, Michelle Lombardo, Jane Adams, Diedrich Bader, Andrew Wilson, Cynthia Watros, Abraham Benrubi, Catherine E. Coulson, Douglas Rowe Director: Gary Lundgren Summary: Though he has no athletic ability whatsoever, college student Calvin Marshall (Alex Frost) is so blindly single-minded about making the school baseball team that Coach Little (Steve Zahn) -- a former minor league player -- relents and lets him on the squad. But when he's sidelined by an injury, Calvin has an opportunity to discover his true talent in life. My Thoughts: "It's not a bad film, but it's not great either. It's just a bland movie. Not to much going on to keep you interested throughout. The characters are OK, but you don't really connect with any of them nor do you care to. They are just very bland. The only character that showed any real life was Steve Zahn's character as Coach Little. His character was funny and most of the time, the most enjoyable to watch. Definitely a forgettable movie."