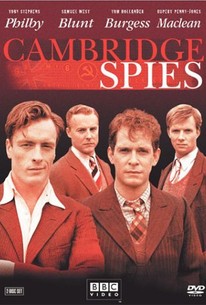 Harold "Kim" Philby, Anthony Blunt, Guy Burgess, and Donald Maclean were four bright, intelligent, and ambitious young men who attended Cambridge University in the early '30s. They all seemed to have promising futures ahead of them and, indeed, all four distinguished themselves in their careers. Burgess and Maclean became respected diplomats, Philby rose to be a senior officer in British intelligence, and Blunt was a well-known art historian. But the four men shared a secret -- certain that Great Britain would fall during the Second World War, and equally convinced that Russia held the world's best and only hope of defeating the Nazi juggernaut, the students became secret agents for the KGB, the Soviet Union's intelligence force, and the former schoolmates worked together as agents for the U.S.S.R. well into the height of the Cold War -- until they were discovered in 1963. Cambridge Spies is a made-for-TV drama produced by the BBC which dramatizes the true story of these unlikely secret agents, exploring how they worked together, and what finally brought their secret lives into the spotlight. It stars Samuel West as Blunt, Toby Stephens as Philby, Tom Hollander as Burgess, and Rupert Penry-Jones as Maclean. ~ Mark Deming, Rovi

The Establishment was portrayed as so irredeemably stupid and snobbish that it made you wonder why the communists bothered with spies at all.

A great drama from the BBC. It's not historically accuarate and it's dubious that the four Cambridge lads are portrayed in such a heroic light but the acting, especially from Hollander, is excellent and the whole things feels nicely paced.