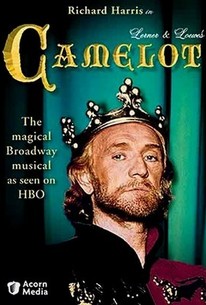 The legendary Richard Harris (Harry Potter and the Sorcerer's Stone, Gladiator) reprises his landmark performance as the wise and valiant King Arthur in this Tony-nominated Broadway stage production filmed in 1982. Recorded at the historic Winter Garden Theatre in New York, this Lerner and Loewe classic boasts a stellar cast that includes Richard Muenz, Barrie Ingham, Richard Backus and Meg Bussert as the captivating Guinevere.

There are no critic reviews yet for Camelot. Keep checking Rotten Tomatoes for updates!

There are no featured reviews for Camelot at this time.